Telynau Vining supported the Wales Harp Festival, which took place over April 6th – 7th, 2016 in Caernarfon. There was a busy concert programme, a course, and a spectacle of fifty harpists playing together on the galleries and balconies in Galeri!

The festival this year also included a course, which ran from 10AM – 5PM on both April 6th and 7th. It was suitable for harpists of all ages and stages, and tutors included Elinor Bennett, Eira Lynn Jones, Morwen Blythin, Einir Wyn Hughes and Dylan Wyn Rowlands. 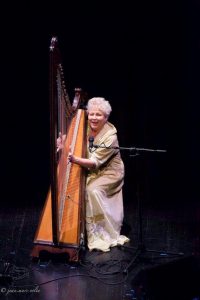 At 2PM on April 6th, course participants and the general public enjoyed a lecture-recital by Elinor Bennett and Lord Thomas of Gresford. This was about the lives of the famous Welsh Romany ‘Abram Wood’ family. Lord Thomas is descended from Abram Wood’s granddaughter – Black Ellen – whom he describes as “the finest story teller and the most powerful witch of all the descendants”. His recollections were accompanied by Elinor Bennett on the triple harp. 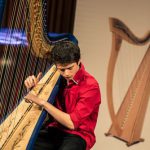 The festival is an annual event organised by the Canolfan Gerdd William Mathias Music Centre. Every fourth year, it becomes the larger-scale Wales International Harp Festival – the next of which will be in 2018.