Is “Celtic” a myth? The Lever Harp in BrittanyA conversation with Marie-Claire Jamet

We always have a great time at the Zagreb Harp Festival. The programme is intriguing and high-quality, and we are so warmly welcomed by Tajana Vukelić Peić and her colleagues. On the classical side, 2015’s festival offered concertos with Isabelle Moretti and the Zagreb Soloists; harp and viola chamber repertoire performed by Florence Sitruk and Guy Ben Ziony; and a solo recital shared by Croatian artists Ana Brateljivić and Diana Grubišić Ćiković. More unusually, Claire Le Fur played traditional music from the West Indies and Venezuela with Guy Louiset on steel pan, and Raoul Moretti presented his fascinating multimedia / ElectroHarp show, Harpscapes. There was a busy schedule of masterclasses and lectures – for example, on the Russian Harp School, with Irina Pashinskaya – and lovely provision for children. Vlasta Hribar and Leonora Surian launched “Nanita”, their CD of Croatian lullabies and other children’s songs, and there was a youth harp competition. The results of the youth competition, judged by Isabelle Moretti (president), Florence Sitruk and Irina Pashinskaya, are as follows:

As a company, we love festivals. Each one gives us fresh cause to remember why: one might be particularly collegial, another an incredible party, another reaching out to the wider community, creating new audiences for the harp. We always come back with new impetus from the rich variety of every festival programme. 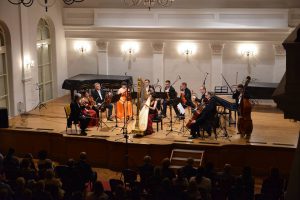 Also: every musician has some “eureka!” moments in their careers they never forget. These may be in the course of lessons, courses and masterclasses – where a teacher, perhaps within just fifteen minutes, totally changes your perspective about the harp and what you’re doing with it. Equally, they may come from listening to others in concert. In Zagreb, Isabelle Moretti gave an unforgettable performance of Parish Alvars’ Concertino Op. 34, and the Debussy Dances, with the Zagreb Soloists.

It was actually the second time Isabelle has performed the Parish-Alvars in Zagreb, and there is a clip from 2008’s performance on YouTube. This will give you an idea, but really, you had to be there. The sound, the passion and the complete mastery of such a difficult work had to be seen to be believed. A performance of this intensity reminds everyone why we’re all doing this – why we pursue lives in music, in whichever of their many directions and with all the challenges they bring. As Raoul Moretti said (it was a Moretti day, Raoul having played Harpscapes that afternoon), we were all privileged to have heard it. I do feel like I’m dancing about architecture in trying to describe it, but nonetheless I will have a go. It’s easy to forget about attending concerts one is oneself not in (and it’s hard to find the time). But these can be some of the most profound experiences we can have, and at the end of the day, we are all in this together in search of the profound.

Is “Celtic” a myth? The Lever Harp in BrittanyA conversation with Marie-Claire Jamet