Ten years of the Festival Camac, celebrated well in Nancy!

Ca y est! We’re back from celebrating our tenth Festival Camac in Nancy. Over the last decade, our festival has become a consistent concept, always underpinned by two key ideas. The first is to reveal as many different facets of the harp as stssible, for as many different audiences as possible. We invite concert artists and traditional musicians, present everything from jazz and pop to the newest reaches of the avant-garde, and enjoy the performances by everyone from the most famous soloists in the world, to the youngest members of the regional classes. The second defining feature of every Festival Camac is that it is regional. Every year for the last ten years, we have held a festival somewhere French-speaking, that is not Paris. Culture is not the exclusive preserve of capital cities: indeed, the more a society values regional cultural provision, the stronger is every art form. Whatever the Romantics thought about art for art’s sake, this is not how most art endures. Its power lies rather in how it reaches people, how it is relevant to and touches them. A great work of art may be universally and timelessly relevant, but you will not discover it if it is sitting in the Louvre or being performed in the Salle Gaveau, and you live seven hours’ drive away.

Moreover, there are very few – indeed, almost no – harp concerts included in mainstream concert seasons. Venues and managers are afraid there is no audience for them; but our festival is proving, year after year, that there is. It is also important that harp students and their families have the chance to hear their favourite instrument in concert, and this is another of our motivations in organising our travelling festival.

And so it was that we travelled for seven hours from Mouzeil, loaded with every conceivable type of harp, from a custom, French blue Ulysse with hand-painted gold decoration, to a selection of antique instruments. We didn’t even only go to Nancy: rehearsals for our opening concerto evening began in nearby Metz, with the Mettensis Symphonia. This programme featured no less than four harp concertos: the Handel Concerto with Valérie Milot, the Debussy Dances with Mai Fukui, Boildieu with Isabelle Moretti, and as a grand finale, six harps on the stage for Granville Bantock’s Celtic Symphony. In this, our three soloists were joined by three young professionals originally from the class of the Nancy conservatoire: Lucie Delhaye, Léo Doumène and Blandine Pigaglio. The Mettensis Symphonia is an amateur orchestra, who came to our rescue when it turned out we couldn’t use the conservatoire’s orchestra. None of the works performed – particularly not the Bantock or the Boildieu – are self-evident even for professional ensembles. We were touched beyond measure by the orchestra’s commitment to such a big programme, and delighted with the results. They even practiced in advance with student soloists. We felt rejuvenated by the orchestra’s enthusiasm and concentration, every evening after they’d all done a full day’s work in other fields, from nuclear physics to artisan cheese-making. At the end of the day, we should all be amateurs at heart, there for the love of music.

After an exhilarating Friday night of concertos, we proceeded to Nancy’s magnificent town hall for every Festival Camac’s hallmark “harpélidoskope” concert. This always presents classical music, traditional music, and jazz, pop, or otherwise music of today. Firstly, Valeria Voshchennikova gave a magnificent recital of French and Russian repertoire. She amazed us all (and there were a lot of us – we had to set up a side room with screens, such was the demand for tickets) with her beautiful sound, fine musicianship and unaffected artistry at such a young age. Kim Robertson was next up, with a series of her own, very inventive Celtic arrangements – and finally, the Milevska Trio rocked the gilded environs with their super-sharp, spray-on-tight jazz. If you haven’t yet discovered Rossitza and her colleagues Cédric Le Donne and Frederick Lacroix, you should. Saturday was also the day for a special focus on our collection of historical harps. Jakez tuned approximately four thousand strings, and then Elinor Bennett gave a wonderful recital on no less than five still-playable instruments from the collection. It was the first time our Nadermann single-action harp had been played since the nineteenth century, was played since end of nineteenth century, as it had spent over a hundred years hidden in a tower of an old castle in the center of France. It was also the second time it was played –  we are very grateful to Elinor for agreeing to perform twice in quick succession, because of the number of people who wanted to hear her. “A great artist”, said one audience member, “and modest, too”: at the end of the concert, Elinor turned and applauded the noble instruments lined up next to her, and said she had not wanted to stop playing them.

On Sunday, Hélène Breschand presented her installation with pupils from the conservatoires of the region. As we entered the auditorium, we were confronted with harps balancing in unexpected ways – propped at an angle against stools, lying on the floor, prepared with cloth, clips and mallets, and backed by a huge screen playing excepts from Henri Michaux’s ‘Images du monde visionnaire’. An exploration of psychedelic experience, it was about perception, and changes of perception. During the forty-minute group improvisation, the young students decided when and how to contribute. “You decide to play”, Hélène told them. “The point is, once you decide, then you do it, without diffidence or hesitation”. Hélène is right that in all types of music, you’re either doing it, or you aren’t. There is no point in doing it half-heartedly, because music is about the heart. An inhibited performance is unconvincing and not enjoyable; it has nothing to say. Holding back because you’re afraid to make a mistake is counter-productive, only serving to make your performance less perfect, not more.

Special thanks are due to two particularly notable contributions to the Nancy festival. One is the group of volunteers, who helped us immeasurably by driving artists from one venue to another. Volunteers are the glue that holds many a festival together, and they’re not given enough credit. Not only do they make life logistically much easier for the artists and the organizers, but they make it much nicer. It is much more fun to be picked up by someone who is pleased to see you and enthusiastic about your upcoming performance, than by a silent driver who’ll take you to a faceless hotel room. After all, festivals are about meeting old and making new friends, and enjoying music together. 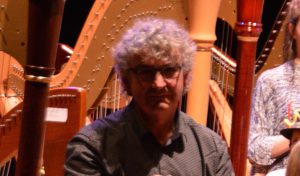 Above all, we would like to thank Philippe Villa, harp professor at the Nancy Conservatoire. The smooth running of any festival is the result of countless crises behind the scenes. These can be small, or major – but whatever their magnitude, they are all urgent, and they all ring the mobile phone of one person. We organize many events, and if there is one thing we have learnt in the last ten years, it is that regardless of what we do back in our offices, it remains impossible to have a great event without a good collaborator at the venue. We could not have wished for a better lynchpin than Philippe, and the festival’s joyous atmosphere is due in no small measure to him.