For everyone interested in Breton music, here is a colloquium in Mellac (Brittany) in November.

Two hundred years ago this year, in Quimperlé on July 6th, 1815, Théodore Hersart de la Villemarqué was born. He is the father of the famous Barzaz-Breiz, a collection of Breton traditional songs first edited in 1839. The airs collected by La Villemarqué have become a key reference in Breton cultural studies, have been arranged numerous times for the (lever) harp, and have been taken up by several generations of harpists. These include Denise Mégevand (who wrote the arrangements for Telenn Bleimor and edited the two-volume La Musique du Barzaz Breiz), Alan Stivell, Jakez François, Dominig Bouchaud, Myrdhin, Kristen Noguès, Mariannig Larc’hantec (who, incidentally, published another volume, Le Barzaz Breiz raconté aux harpistes), Tristan Le Govic, and many more. 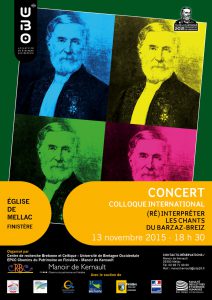 La Villemarqué’s bicentenary has been recognised by the Ministry of Culture as a national commemoration. To mark the occasion, the Centre de Recherche Bretonne et Celtique at the Université de Bretagne Occidentale in Brest is organising a colloquium in collaboration with the Manoir de Kernault in Mellac. The colloquium will be held at the Manoir, a national heritage site in the Finistère region of Brittany, on November 12th and 13th, 2015. In addition to the academic presentations about the life and work of La Villemarqué, the project’s organisers have included a musical aspect in the form of a concert on Friday, November 13th, at 6:30PM in Mellac church.

This concert, “(Re)interpret the songs of Barzaz-Breiz“, will be in three parts. Firstly, we will hear examples of how the songs would have been performed at the time of their first publication, both in cultivated circles and in the popular oral tradition. Extracts from the songs will follow, as they were reimagined from 1930 to the present day, by many instrumentalists and singers. Finally, there will be a work for string quartet and voice, commissioned from Patrick Choquet, and performed for the occasion by the Sillages ensemble. This piece is based on a selection of the songs of Barzaz-Breiz.

The first half of the concert will also be a chance to hear “Bosen Elliant – the Plague of Elliant” – the very first song to be published by La Villemarqué, in 1836 in the journal L’Echo de la Jeune France. The Breton song was supplemented by a French translation, and a musical arrangement for piano or harp. This arrangement was the work of Julie Feuillet-Dumus, one of the great harpists of the age. Born in Brussels in 1809, she was a De Weissenbruch, part of a distinguished family of Belgian printers and music editors. She had a fine career as a concert harpist, performing repeatedly all over Europe in the middle of the 1930s. Titled “First harpist of the Queen of Belgium”, she died prematurely, in the March of 1839 in Paris.

For this concert, the adaptation of “The Plague of Elliant” will be performed by the singer Marthe Vassalo, accompanied on pedal harp by Anne Le Signor.