Maestral is a great fusion band, and they are: Anne Postic (lever harp), Pierre-Antoine Colas (trumpet), Stéphane Goasguen (double bass) and Herri Loquet (drums and percussion). Based on jazz and Breton traditional music, the quartet also brings other Celtic, Latin, Arab, classical and contemporary sounds into the mix. On March 10th, their new CD is out: Confluences, twelve Celtic tracks infused with jazz, Latin and salsa. 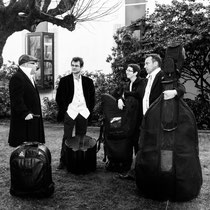 “We all live in Brittany now, in Brest and in Landerneau, but we have all pursued different paths, and come from very diverse musical backgrounds”, Anne explains. “Pierre-Antoinne Colas (trumpet) is originally from Charente-Maritime. He’s classically-trained, has played with many rock groups – Merzhin, for example – and has been particularly interested in jazz and Latin music for a long time. Stéphane Goasguen (double bass) comes from Brest, but was long based in Paris. He also has a classical background, working with well-known orchestras such as the Paris opera and the Orchestre de Paris/Wolfgang Sawallish, the Orchestre de Lille/Jean-Claude Casadesus, Orchestre Nationale du Capitole de Toulouse, Orchestre de Bretagne, etc. He is also an active chamber musician, most notably with the Matheus ensemble. Herri Loquet (percussion, drums) is also from Brest, and studied snare drum in Scotland. He performs and teaches traditional music, and leads a snare drum ensemble. He also plays in rock groups, and in French chanson bands. As for me, I’m from the Breton east coast and I’ve long been passionate about traditional music, especially Breton, Scottish and Irish music. Nonetheless, I have always been interested in other musical styles, such as classical music, contemporary music, and jazz. Maestral is a human encounter first. From this fact, our music is a meeting of our worlds and our backgrounds.

Traditional music is not frozen music. It evolves with the time in which it finds itself, adapts itself to its age, and to societal change. Musicians anchor themselves in the strong identity of a particular culture, without locking themselves inside it. To know where your roots are opens doors to other worlds. This is something we want to highlight, with Maestral. Traditional music also gives us a lot of freedom, because it is constantly on the move. If you listen to several recordings of the same song, you will notice how much interpretations can differ. This can be to do with the individual artist and what he wants to communicate through the song, and there can also be great variety on a melodic and/or rhythmic level. This sort of music is from the oral tradition. It is not “confined” to a sheet of paper, and there is great potential for personal interpretation, for melodic variation, and so on. This is also a characteristic of jazz, with the importance it gives to improvisation.

For some decades now, Breton music has been evolving through fusion with other styles. Of course, there are some purists, who vary in how convinced they are about the fusion of Breton music with other music aesthetics, but my feeling is that being open to other cultures remains an important factor for the majority. That said, it’s also important to have a firm knowledge of the structures, rhythms, forms, tempi, and so on of different traditional airs, before you set about taking them elsewhere. Our music is more inspired by traditional music. Our aim is not to play at a fest-noz, and therefore to respect the structures you need there for dancing. We feel quite free, add improvisatory sections, or give our airs different rhythms. We are inspired by our fundamental material, and by our different influences, to create our own music.

I have been immersed in Breton music and culture since I was very small, I have it stamped on me. I own this musical identity, but it also feeds encounters of my own devising, I am not interested in reproducing folklore as such. I had a moment of genuine revelation in the nineties, when I heard Didier Squiban for the first time. I was so impressed by his swing, and his arrangements that were very novel at the time, all done with nothing other than a piano. Other examples would be the Guichen brothers, and Ar Re Yaouank, to name but two more. These musicians all greatly influenced me when I was searching for my own style. Another eureka moment when I was a budding musician, was the first time I went to Scotland, in 1998. I discovered a land where traditional music belonged to everyone, regardless of their instrumental level, regardless indeed of their instrument, and no matter where they came from. I was impressed by how straightforwardly we were welcomed, and by how enthusiastically everyone played. It was worlds away from the organised concerts at my conservatoire, which I was also happy to take part in, but with plenty of nervousness! In Scotland, it was music for music’s sake, for the pleasure of playing together, to share a moment, and make friends. My time in Scotland totally changed my approach to music. It somehow freed me from the pressure to play the right note as perfectly as possible, and I also formed unbreakable bonds with the people there. I also feel this sense of sharing in Maestral, the joy of working together, and a human dimension which is so important in my eyes.”