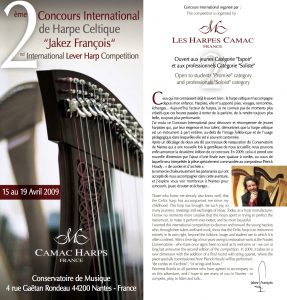 We held the Jakez François International Lever Harp Competition in Nantes, between 2005 – 2009. Recently, we have continued our commitment to emphasising the lever harp’s flourishing identity with Dasson An Delenn, also in our native Brittany.

Laureates of the JF Lever Harp Competition include many notable professionals today: Catriona McKay, François Pernel, Ben Creighton-Griffiths, Anne Postic, and Ameylia Saad, to name but a few. The competition also made its contribution to the classical lever repertoire, for example commissioning Pierrick Houdy’s ‘De cordes et d’archets’ (‘Of bows and arrows’) for the 2009 senior final.

Harpblog also published a collection of lever-harp-themed articles around the 2009 competition. Is Celtic a Myth? The Lever Harp in Brittany offers some background to our company roots, and there are also some in-depth interviews with some of the most important Breton and other lever harp artists: for example Dominig Bouchaud, Mariannig Larc’hantec, Kim Robertson and Mary Macmaster.