Eight days before the tenth Camac Festival gets underway in Nancy, the fabulous e-gift for all you members of the special mailing list is another score – this time, a contemporary one by Hélène Breschand. In fact, you have a choice of three; one for Bardic harp, one for any sort of harp(s), and a graphic score. 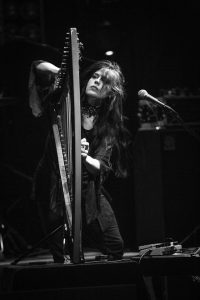 “J’enrage”, for Bardic, was written for the theatrical show “Double Face” (2009), where Hélène performed with Isabelle Moretti. It is a solo work inspired by and dedicated to Isabelle. “Antre de jeux” (“Lair of games”) can be played by several musicians at once, with their own choices of time and rhythm, as several versions. “I often write several versions of the same pieces”, says Hélène. “This is partly to adapt them to different types of harp, and partly because you don’t always find how to write the music down straight away. That can change. You find the music not so much in the notes, but rather through the attitude and heart that you bring to it.

All three works also use voice. I like music theatre very much, for example in the style of Georges Aperghis, Jacques Rebotier, or Marie-Hélène Fournier. We are lucky to be able to play and sing, speak…laugh! At the same time.
Being a woman myself, all three of my pieces here are also portraits of women. But in any case, they’re about a being at one with their instrument – their double, or their alter ego. “Sleeping Woman”, the graphic score, is not in any one category. Often it is singers who perform it; sometimes, of course, harpists. Not everything is laid down by the notation: each performer can invent a story behind it, it is really to be interpreted.”
I want to enable video content and agree that data will be loaded from Vimeo (see Privacy Policy).
You can discover more of Hélène’s work on her website, YouTube, Facebook and also her contemporary music resource Les Signes de L’Arc. Hélène created the latter together with Aurélie Barbé, Mathilde Aubat-Andrieu, Laurence Bancaud: it contains an extensive library of unedited scores, teaching suggestions (incorporating new music at all levels), and there is also a book, a detailed guide to harp music of the twentieth and twenty-first centuries.

In Nancy, Hélène will be creating a group concert improvisation, inspired by the Michaux / Duvivier film, “Images du monde visionnaire”. This film was produced by the Swiss pharmaceutical company Sandoz as an educational tool about psychedelics: drugs which with Michaux had experimented. In the film as well as in the effects of the drugs themselves, there is an intriguing flux between the real and imagined which has long fascinated artists. It is also an issue particularly relevant to music, which is acutely physical, yet free from narrative contraints. “La musique peut jouer librement le rôle de sensation physique hors toute dramaturgie”, Hélène reflects. “il s’agit juste de se laisser couler dans l’espace temps du rêve.” (“Music is free to be physical, unconfined by any dramatic framework. You just have to let yourself sink into a dream state.”)

There will be two performances by Hélène and the students of the Conservatoire du Grand Nancy,  co-supported by the Institut Européen du Cinéma et de l’Audiovisuel (IECA).

Didn’t yet sign up to our special GRAND COUNTDOWN gift list? It’s not too late to receive another seven gifts!