Courtesy of 2015’s Camac Festival artists, today’s virtual largesse continues in a contemporary vein. This time it’s a recording instead of a score: the first movement of Toshiro Mayuzumi’s excellent “Rokudan”. It’s been recorded by Mai Fukui, who will perform the Debussy Dances for us in Nancy next week. 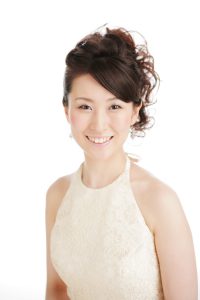 Born in Japan, Mai Fukui grew up in Sweden and studied at the CNSMDP in the class of Isabelle Moretti. Supported by a scholarship from the Rohm Music Foundation, Mai received her Master’s degree with unanimous highest honours, and a special prize from the jury. She has won prizes in many competitions, including Osaka (2001), Nippon (2002), Cité des Arts (2004), Bloomington (2007), and Israel (2012). She has also won the Sakuya Konohana Award from the city of Osaka in 2014, and the Aoyama Music Award for New Talent from the Kyoto Aoyama Music Foundation in 2012.

Both Mai Fukui and Mayuzumi Toshiro are Japanese artists. I have long admired Rokudan, which isn’t performed half as much as it should be. I thought it would be interesting to ask Mai about the Japanese nature of the work.

“The original “Rokudan” was “Rokudan-no-shirabe”, written by Kengyo Yatsuhashi (1614-1685)”, Mai explains. “It was a piece written for the traditional Japanese koto, composed during the Edo period (1603-1868). It was actually written even before Bach was born, and centuries before Western music was introduced to Japan. So we may say that this music was purely Japanese traditional music. The Rokudan that I have recorded is a contemporary arrangement for concert harp, written in 1989 by Toshiro Mayuzumi (1929-1997).

It was during the Meiji Period (1868-1912) that the Western music was introduced to Japan. Many musicians, including Mayuzumi, started studying abroad. He studied at the Paris Conservatoire, like I did! Though he dropped out after a year, he was much influenced by musique concrète, electronic music, the music of Edgard Varèse,  Cage’s aleatoric music… and he introduced all these to Japan. 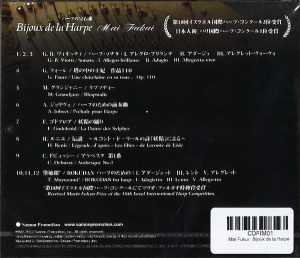 In his Rokudan, he successfully uses extended techniques such as pedal glissandi, playing with the tuning key and Bartok pizzicato, to evoke the sounds of Japanese traditional instruments. The first movement sounds like the koto, the third movement (performed with the tuning key) gives you an idea of the shamisen (the Japanese guitar), and the fifth movement returns to the koto, this time combined with the taiko (Japanese drum).”

You can enjoy the rest of Rokudan, together with many other beautiful solo works, on Mai’s debut CD “Bijoux de la Harpe”. Her album was named “CD of the Highest Honour” in the August 2014 edition of the Record Geijutsu Magazine, Japan’s most prestigious album review. It is available to buy  from the Camac online shop.

Not yet signed up for the great Camac countdown? Do so using this form, and still receive six nice things!