I once played background music for an Arab king at London’s Dorchester Hotel. I had to sit in the canteen for four hours before the gig for reasons I now forget, then hide in a broom cupboard while the all-male guests went into dinner, so they didn’t lay eyes on a woman. Once they were safely out of eyeshot, I crept out and played behind a screen.

After about an hour I got up for a break. “Ooh no”, said one of the king’s servants. “It would be better if you took no breaks in case it displeases His Majesty.” “Well”, I said militantly. “It says in my contract, break with sandwich every hour.” At this point, the servant pushed an envelope under the screen, containing what those of us in royal circles call one thousand crisp ones. “But of course”, I continued, “I would be honoured to perform for His Majesty for as long as the evening affords.” 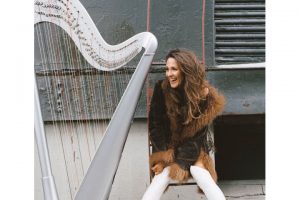 Even in pre-credit crunch London, the United Arab Emirates were on a different scale. Harpist Shelley Frost has been working in Dubai for the last decade. Originally, she took a hotel lobby job to fund a new harp, but stayed on. She has developed playing for corporate events to a fantastically professional level, and recently has also branched out into artist management, and supporting local musicians. Her company, The Fridge, is now the centre of Dubai’s youthful music scene.

Dubai, the second largest Emirate in the United Arab Emirates, is cosmopolitan, liberal, and extremely sunny. Its economy has been built on oil, but revenue from this and natural gas now account for only 6% of Dubai‘s income, and the one-time fishing village has become a world centre for real estate, financial services and tourism. Sometimes it feels like a boiling, traffic-clogged building site, but this frenzied development is also making it one of the most vibrant places in the Middle East.

“The change in Dubai has been extraordinary since I arrived in 1997”, says Shelley. “It used to have a lot more of an ex-pat village feel – you‘d know at least a third of the people at any party. It‘s more stressful and less cosy now, but there‘s a lot more going on as a result.” 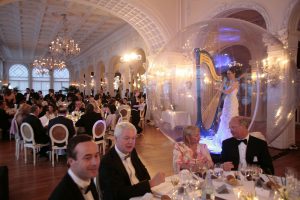 “In the beginning, there were almost no freelance musicians; everyone was attached to hotel contracts. Now the scene has developed enough that you can build up a busy freelance career in a similar way to London or New York – that is, you can make it if you have good contacts, and if you are very good at what you do.

It isn‘t enough, if you are going to go into corporate music, to be able to play the harp. Björk said “people hear what they see“ – you must look immaculate, because your look is part of, indeed most of, your job.”

“While they often do want normal harp music, looking good in Dubai is often also about looking eye-catching. On a corporate level, you aren‘t playing to an audience of classical music aficionados, so everything needs to be accessible and instantly impressive. People in Dubai want big-impact event music. The violinists, saxophonists and so on would always play standing up and dance around, but a harpist has to sit. It’s too tame, and you‘re limited in what you can wear – no miniskirts or huge, ridiculous skirts. I was playing quite a lot of lounge and house music by this point,improvising over backing tracks with my silver electric harp. That sort of music doesn‘t change key very often, so I decided to play standing up. I had an acrylic stand made so the harp would be at the same height as it would be to my eye were I sitting, and the clients absolutely loved it. It was amazing what a difference just doing that made to how the harp was perceived.

Even if you stand up, you still can‘t move around the room with a concert harp, so I am always asking myself how I can vary the vibe around me. About four years ago I went to an events conference in the US. There was a Canadian company there who produce the most incredible plastic structures, like huge domes. I went inside and it was fascinating – the feeling is that you are in the room, because you can see and be seen by the people around you, but you are also cut off. I had the company make me a very small bubble with a built-in stage at the bottom. I thought I would just use it sometimes for fun, but it started off a craze in Dubai for musicians playing in bubbles! People are fascinated by it – how I get in there (you inflate it around you), how I breathe…they find it magical and incredible. 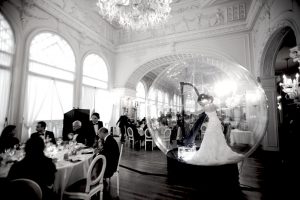 Last year, the bubble travelled to Venice for the Luxury Brand Summit, where I played a harp (kindly sent by Camac) on the Lido. I enjoy the “have harp, will travel“ element of corporate music, which will give you endless dinner party stories. Kuwait customs once decided Ralph Lauren had to come and pick up my harp personally, or they wouldn‘t let it through… doing the house and chill-out music has also led me to work more seriously with the fantastic Iraqi hip hop artist, The Narcicyst of Euphrates.

On all levels, a corporate musician must be flexible. For example, it‘s expected that you will go and liaise with the events organizer probably at least twice before the date, so you will have to go, even if you are used to just turning up on the day and you think these meetings are unnecessary. If you are booked until midnight and the guests turn up two or three hours late, you can‘t leave as you would in some other cities: you will go home at three or four in the morning. Arabic weddings (I play a lot of these, in Qatar as well as Dubai) are also a good test of your ingenuity. The wedding parties are women-only and often have two thousand guests. The bride makes an entrance once everyone else is there, and the idea is that she should arrive like a megastar. They always want something nobody has seen ever before to make their entrance special. 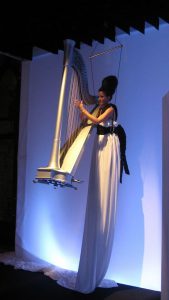 To my mind, there are two types of musician. There is the hotel fake musician who doesn‘t care anymore, and there is the real musician who may play hotel jobs, but who also wants to collaborate, build their own ideas and who is alive and well, somehow. After a few years in Dubai, I had more work than I knew what to do with, and I wanted to expand the almost non-existent concert music scene. I set up The Fridge Dubai and began to support other musicians: the French harpist Lucie Delhaye, and the singer Mestiza, for example.

The Fridge is self-funded through the corporate work we all do, which allows us to develop our artistic projects. It has become the go-to venue in Dubai for concerts of all genres of music, and the idea is that the company creatively supports the musicians, rather than just acting as a commercial agent who sends them on jobs for as little fee and as much commission as possible. If a musician comes who wants to do very straight classical concerts, I‘ll support them and help them find their chances in Dubai. Or they might want to do education work, or crossover music. Lucie does a lot of the virtuoso harp repertoire, and she has a very creative music and dance project.”

Talking with Shelley, I ask myself why people look down their noses at background music? There are worse ways to earn three figures an hour than by playing the harp in a luxury setting. The only failure of integrity you will suffer on a background date is if you don’t do your job: if you have not understood the client’s brief, are dressed in a way that does not enhance the performance or occasion, and play unsuitable music (like the Hindemith Sonata, which I once heard in the Munich Four Seasons). Secondly, as Shelley points out, music has always had a functional role, as in Haydn‘s symphonies and the operas of Mozart. Thirdly, music has also always had a relationship with money. Whether it comes from business, charity or your parents, someone has to pay for you to learn to play, to purchase your instrument and to eat. In any case, art for art‘s sake is an aesthetic trend from the early nineteenth century. The Romantic Period still has a disproportionate influence on today‘s classical music, yet it bears no relation to how musicians and music have thrived throughout the centuries. They have always gigged, taught, composed works their patrons want, set up enterprises, sold things and taken jobs at court, in church or in a cafe band. 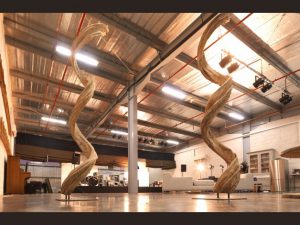 Space in The Fridge Dubai

“Something I have also asked myself,” Shelley reflects, “is how relevant we classically trained musicians are to today’s society. Another thing that music has always done is morphed and developed, changing with the times and keeping relevant. There are the wonderfully talented classical artists, with their concert hall performance careers that have a much revered place in our hearts and culture. But that is not the only valid form of music. There is much fun to be had in enhancing one’s creativity and bringing a theatrical and stage feel to the music you play. Corporate work provides the perfect opportunity for a musician that thrives on live stage performance.”