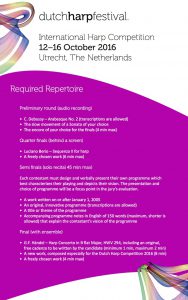 We have long admired the Dutch Harp Festival. Now approaching its fourth edition, it was founded by Remy van Kesteren and his colleagues in Utrecht, 2010. It celebrates the exceptional Dutch harp scene, and creates a harp event of enduring interest and value both to harpists, and to the community of Utrecht. It has also established an international competition that is exceptionally committed to its participants – in the conditions they are given, in the respect with which they are treated, and in how the winners are supported post-event. 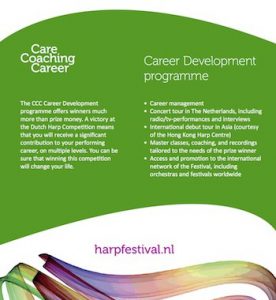 Applications are now open for the fourth Dutch Harp Competition: all information is now up on the festival’s excellent website. The closing date for applications is June 1st, and the competition itself will run alongside the festival from October 12th – 16th, 2016.