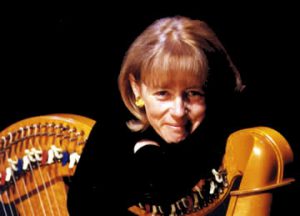 “Once upon a time…all good stories start like this, and this story isn’t only good, it’s unusual. I played – just for once – one of my own pieces during a concert. At that moment the exceptional harpist François Pernel pushed open the door – coincidentally, to shelter from the rain, to warm up, maybe for no reason at all. And he felt close to something in my music.

At this precise moment, pressingly and decisively, he had the idea of recording my most emblematic compositions: a luminous tribute from an instrumentalist to a composer.”

We are pleased to report that Mariannig’s crowdfunding campaign on Ulule has been successful. On the planned CD, you will be able to (re)discover Mariannig Larc’hantec’s compositions, performed by François Pernel. Mariannig’s œuvre (prizewinner as she is of the Dinan composition competitions in 1987 and 1990) is rich and varied, comprising solo works, chamber music, orchestral pieces, and always with the lever harp at the heart of her work.

Always at the service of her instrument, Mariannig has also evolved it. When the lever harp appeared in Paris in the 1950s, it was necessary to work out how to play it – and also to find it a repertoire, something Mariannig got on with by offering a great number of arrangements and compositions. As is written in her  biographie, “her creativity, rooted in her love for the harp, has caused her to explore every facet of her instrument, and continually to develop its repertoire.” As well as being a musician, she is also a renowned teacher: this has led her to compose not only concert repertoire, but also pedagogic works, always with the aim that the lever harp be recognised as an instrument in itself.

To return to the current project, this disc is also the first that will be entirely dedicated to Mariannig’s compositions. With François Pernel – himself a harpist-composer, as we have often mentioned on Harpblog – they have “made a selection of pieces which they consider representative of the composer.” These two artists both wish to develop their instrument, expand the horizons of its repertoire, and see it emancipated, accepted as a serious instrument – for young harpists, and for grown-up musicians.

This recording will also be a fine chance to hear our Excalibur. François Pernel will perform Mariannig’s works on the harp we developed in collaboration with him! We are already looking forward to slotting this disc into our stereo, and to discover the fruit of this meeting between two wonderful harpists.