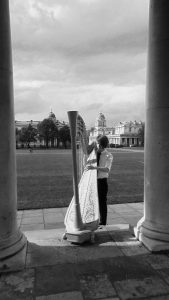 Congratulations to Richard Allen, winner of 2016’s Camac Competition in London, who gave a wonderful prize concert at the Proms at St Jude’s on June 28th. He performed works JS Bach, CPE Bach, Robert Fuchs, Jean Cras and Henriette Renié – to a thrilled audience, who described him as “so talented” and said “he really deserves to go far.”

Born in 1993 in Belfast, Northern Ireland, Richard is currently studying with Gabriella Dall’Olio at the Trinity Laban Conservatoire of Music & Dance. He has performed solo and chamber music works in recitals in the UK and abroad, in venues such as L’église de la Madeleine, Paris; St. Martin-in-the-Fields, London; and the Teatro della Residenza in Monza, Italy. He was the 2011 winner of the Catherine Judge Memorial Award, and the 2013 recipient of the John Marson Harp Prize. Richard is a Trinity College London scholar, and is generously supported by the Countess of Munster Musical Trust and the Nicholas Berwin Charitable Trust. He was also one of the students at our first Académie Camac in 2014!

We are delighted that our association with the Proms At St Jude’s concert series is now in its third year. It is this type of regular collaboration that builds audiences for and interest in the harp, and provides our young laureates with a genuine opportunity in the wider musical sphere. We will continue the collaboration next year, with the prize recital taking place on Tuesday, June 27th 2017.