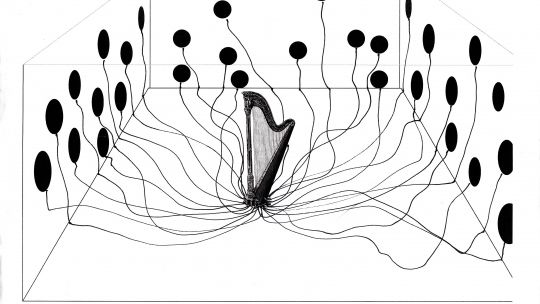 ‘Vortex Room’, an avant-garde project by Norwegian experimental harpist Sunniva Rødland Wettre and composer Erik Dæhlin, has been in the planning since 2013. On Monday 18th and Tuesday 19th of April, it will receive its premiere at Blackbox in the Academy of Fine Art, Grünerløkka. 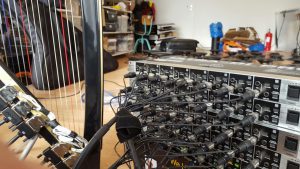 Connecting each of the electroharp’s strings to its own speaker

Every string of Sunniva’s electroharp is wired up to a separate speaker. This creates a huge web of speakers and cables, with the harp at the centre. As such, the music and the space it occupies are fused. As such, the sound is not only manipulated through amplification and processing, but also through where the speakers are in the room. And this mixture of static positioning and live performance are connected to the mathematical concept of vortices: how repeated patterns are formed and developed through time, with or without being affected by external forces.

Click here for booking and venue information (entrance is free for students):