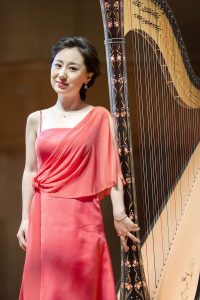 ……from Beijing, to Belfort! We are delighted that our second classical recital at the Camac Festival will be given by Guan Wang. Guan Wang is professor of harp at the China Central Conservatory of Music (CCOM), and principal harpist of the China National Symphony Orchestra. She is also a member of the World Harp Congress Board of Directors, and Secretary General of the Chinese Harp Society, and the Chinese Musicians Association. She has also been named a major harpist by China Central Television. Her solo album, released in 2016, was the first classical harp album to be released in China.

In Belfort, you can hear Guan perform works by Handel, Rossetti, Debussy, Parish-Alvarts, Xie Zhe-Zhi and Tournier. Her recital will take place on Saturday, October 20th at 8PM, and you can book your places here!

You studied in China, and with Isabelle Perrin in Paris. Did you experience different methods in the two countries? If so, how did you bring them together in your musical development?

I am really very lucky that I had two wonderful teachers.  My first teacher, Zuo Yin, was a student of Dulova. I began working with her when I was ten years old. Before that, I played piano and the Zheng, a traditional Chinese instrument. Zuo Yin gave me a good technique, and she always paid great attention to the sound quality. Also, I learned how to practice from her. I met Isabelle during my studies at the Central Conservatory of Music. She came to Beijing with her orchestra, and she gave us a masterclass. At that time, few harpists visited China, and we did not have much contact with the harp world. The following year, I was given a scholarship by the French government, to go to France and study.

Isabelle Perrin is an amazing person, always strong and energetic. She knows me well, and always gives me the advice I need, when I need it! I learned French music from her – it was like she gave me a key to unlock this music. We are still very close. When I need some suggestions, either in music or in my life, I always ask her. For me she is like a lamp – she may not be with me any more, but she always illuminates me.

China has an estimated 30 million piano students, and 10 million violin students. Tests to enter the top conservatories now attract nearly 200,000 students a year. For those of us in the West, sometimes worried about classical music audiences getting older and smaller, this is really incredible. Is the harp scene in China also getting bigger all the time? What is it like?

The harp came late to China. After the founding of New China, there was a German expat class in Shanghai, with a German teacher. The government selected 10 people to study, and after their studies they were given jobs as harpists. I remember that when I was learning, almost nobody knew what the harp was. Our harp student club played in some hotels, and people often asked what kind of instrument it was.

With the development of China and the improvement of people’s living standards, online media became more and more developed, and people got to know the harp. In order to promote the instrument, I have run a harp summer camp at the Forbidden City Concert Hall annually for the last seven years. The effect has been significant; in the first year, we had thirty children at the camp, and this year it will be seventy. I also give solo recitals, which have developed a loyal audience. The summer concert can sell out 1200 tickets.

There are more and more people learning the harp, but it is far from comparable to the piano. China’s population base is so large, that I believe there is still a lot of room for development.

At the World Harp Congress in Hong Kong, we had a great time discovering Asian composers we hadn’t had the chance to hear before. Can you tell us more about how Chinese composers are expanding the harp repertoire?

The Hong Kong World Harp Congress was the first time for the WHC in Asia, and it was a great chance for many Chinese students to attend, and discover the event. The organizing committee wanted to include Chinese elements, and I found two young composers. They are the eldest and third in a group of triplet siblings – the second triplet is a harp student. Although they are young composers, they are very thoughtful. They created the harp quartet “Jing- Ke”, according to the famous Chinese historical event Jing-ke Ci Qin. It was well received in Hong Kong, I think it is a very successful piece. There are still very few Chinese composers who write works for the harp, but we are working on this – I am currently in discussions with another composer to write for harp ensemble. 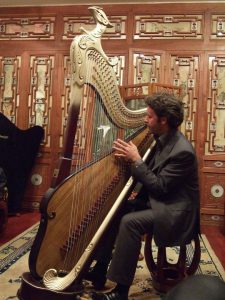 Camac President, Jakez François, is thrilled to try out a Konghou, one of his favourite harps.

At Camac we’re also huge fans of the Konghou – we don’t build them, but we love their expressive bass notes, and the  portamento possibility, which allows pitch bending of the notes. Can you tell us some more about this instrument?

The modern Konghou came about after the founding of New China. Under the advice of the national leaders, several experts copied the instruments depicted in ancient murals, and the pedal/modulation system was made with reference to the harp. The sound is somewhere between the harp, and the Guzheng. The Konghou technique is very similar to the harp. At the beginning, some Konghou teachers even used Western harp methods when they started learning! Nowadays, the development of the Konghou in China is very good, and every player is also vigorously promoting this instrument.