We are back from a collaboration with the Virginia Harp Center, our partners in Virginia and New Jersey. The Princeton Harp Festival was all about strong ideas, professional development, and performances from some of the best lever, electro and concert harpists around. European stars and the Camac France team joined forces with our American friends and colleagues, for a long weekend which felt too short, full of friendship and inspiration. 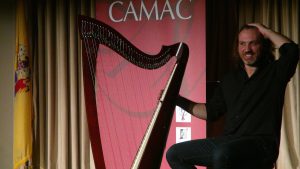 Princeton is well-situated, a short train ride from both Philadelphia and New York. It was down to François Pernel to open the festival, with a concert of mostly original music from his stunning new album Galexya, performed on the powerful new lever harp we have developed in collaboration with him – Excalibur. If you think the lever harp is a student instrument, something for gentle forms of traditional music, or a ‘small’ harp, think again! Whether it is with Stravinsky, Michael Jackson or one of his own works, François never fails to surprise, amaze and delight us, with his far-reaching, profound musical imagination, and his expressive virtuosity. “It is not only about the lever harp”,  Jakez remarks, “nor even the harp in general – it is simply music, in its purest form. The short pieces are like a necklace of pearls, where it is impossible to say which is the finest or most subtle.” 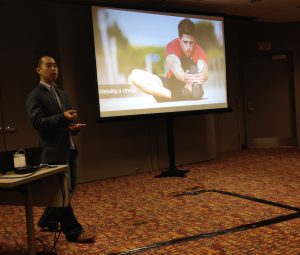 Saturday morning dawned (particularly for the French team – those of us with East-to-West jet lag are always at breakfast at 6AM, improbably bright-eyed), and a busy programme of classes and masterclasses began. From discussing ornamentation and “authentic interpretation” with Sylvain Blassel, to exploring performance psychology with Noa Kageyama, the timetable was both broad and top-level, offering much new food for thought. Even the extremely youthful, like me, have traditionally been left by our conservatoires to work out how to cope with performance nerves by ourselves, with varying degrees of success. The packed room for Noa’s performance psychology class revealed that this issue continues to be pressing, and we were all fascinated to try out his techniques, many derived from sports psychology. There were also classes on pedagogy, and marketing yourself: a comprehensive set of invaluable sessions for professional harpists, and a credit to the Virginia Harp Center’s artistic planning team. 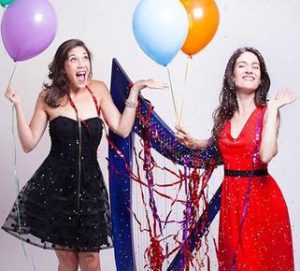 On Saturday night, we greatly enjoyed an opening concert by harpists of the region, before Addi and Jacq took to the stage. Addi and Jacq are a new singer-songwriting duo, who won the 2015 NPR-WNYC Battle of the Boroughs. We soon discovered why: they are fantastic, with a big, warm sound cleverly augmented by loops and processing, and a great mix of brilliant covers, and original songs. If you haven’t had a chance to hear them, do so SOON! For example, they’ll soon be at the Greene Space, on January 27th.

For his part, Sylvain Blassel took a holy cow by the horns – so-called authentic performance practice. Why “so-called”? Because that is all it is. “Authentic” is by definition objective, factual, absolute, whereas “interpretation” necessarily is about something subjective and fluid. We cannot ever know exactly how something sounded in the eighteenth century, even if there are many sources that give us an idea of good and bad taste in the period. But we were not there, and there are no recordings – and given how much an individual musician’s interpretation may vary, either in comparison to others or over the course of their own career, there would have been just as many different types of performance then as there are today. While discussing concepts of style and taste, Sylvain explained why the famous remark “it is not in the style of the period” is a relatively meaningless concept. “Authentic interpretation” is even a contradiction in terms. It was extremely satisfying to hear Sylvain, in the course of a fascinating hour, take apart a lazy idea that is still far too blithely accepted, especially among competition juries. 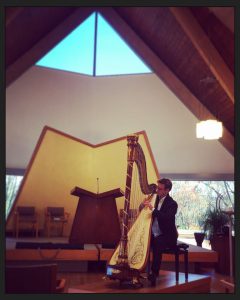 “Return to the text”, argued Sylvain. “This is one of the first steps for those who seek to be authentic. We have no recordings, there are no videos. You have the score, and you can analyse the score. It is absolutely necessary to research the period, but not in order to reproduce exactly what Bach would have wanted, nor to succeed where the whole of science has failed up until now, in travelling through time. You do it in order to expand your perceptions while you are analysing the score, and as such, you’ll arrive at interpretations – subjective as they remain – that contain ideas we haven’t thought of before, and which correspond better to the text, experienced today. The only possible authenticity is when you are serving the text, and not the other way round. Or to put it another way: musicology is there to serve the music, and not the other way round. And this has nothing to do with tradition. Tradition is the establishment of a particular taste, constructed over time. When taste evolves, you see breaks with tradition. It also has value, but it rarely has much to do with thinking carefully about the text, nor about authenticity.” 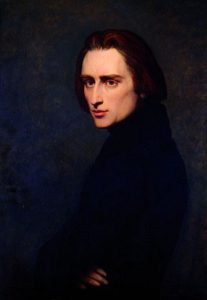 It was Liszt who proclaimed “tradition is laziness”, and aptly it was with an all-Liszt programme that Sylvain played the festival’s grand finale, a solo recital at Princeton’s Unitarian Universalist Church. What can I say? We hardly ever have the chance to hear this sort of music on the harp. We hear the  great harp pieces that do exist over and over again. We also hear wonderfully able renditions of other original works, and then there is transcription. To return to Sylvain’s point about the text, even the greatest performer can only do so much, because the text is a fixed point, an existing fact. The best harpists always engage with transcription sooner or later, but nobody has yet gone as far as Sylvain Blassel. Liszt, not just two or three lighter pieces, but the Hungarian Rhapsodies, the Légendes? The late Beethoven sonatas (one movement from which Sylvain performed as an encore)? Or his second encore, the Tristan and Isolde Liebestod? Tristan and Isolde? On the harp?

This concert in Princeton was unforgettable. Most of the audience were in tears; everyone rose to their feet at the end, as one, in an instant group ovation. It was an evening where you at once forgot about the harp and experienced only the music – and equally, the harp took on a soul of its own and seemed to be talking to you, straight to you. That’s it, there it is. Here’s why we’re all working doing what we do.

As we were all standing around wringing out our handkerchiefs, our esteemed colleagues at the Virginia Harp Center had the inspired idea of decamping to the Triumph Brewery, for a final celebration. We warmly recommend the pumpkin stout, and this is also an important reason why we love festivals – not for the beer as such, but for the conviviality, and the chance to sit down together with old and new friends. Our congratulations to the VHC for an immaculately-organised, fun and inspiring event! We hope it will not be long until our next paddle across the pond.