In Praise of Harp Associations

10th Camac Trophy, Lorient Interceltic FestivalWe’re all going on a…

The harp world is nothing if not unique. One of its distinguishing marks is an intriguing mixture of solitude, and its opposite. You begin alone, the only harpist in your youth orchestra or school. Twenty years later, you know everyone. The harp world’s compact size, and the possibility therefore of actually knowing almost everyone, is like the reward for your earlier loneliness, when there was nobody to help you count your bars. Or it should be – in some harp scenes, it’s still the case that colleagues compete with each other, but this never works out well. If we support each other, everyone has more work, easier instrument logistics, wider artistic perspectives and a great deal more fun.
This happy support is no better exemplified than via the harp associations that are active in many parts of the world. It was in 1959, at the first International Harp Contest in Israel, that Pierre Jamet and his great friend Marcel Grandjany suggested forming an international association of harpists and friends of the harp, with the editing of a corresponding journal. The French Association Internationale des Harpistes et des Amis de la Harpe is still regarded as the mother of all harp associations. The annual competition we have sponsored in London for over the last decade is also supported by the United Kingdom Harp Association, which offer the second prize. The American Harp Society is an extensive professional organ with diverse competitions, conferences, chapter meetings throughout the USA, summer institutes and other resources.Throughout the world, harpists work voluntarily to collect and publish news, opportunities, job offers, competition and audition openings, and so on, in order to benefit their communities.

We recently went to the AGM of the German harp association, the VDH / Verband der Harfenisten in Deutschland e.V. Like all harp associations, it is a non-profit. In addition to its quarterly journal, publishing house and web-based resources, it has put on three days of concerts and courses entirely free of charge for members. The programme conceived by VDH president Isabel Moreton, AGM organiser Eva Curth, and their colleagues included a concert of prizewinners from Jugend Musiziert; lectures about efficient practising and stress management from Silke Aichhorn and Kirsten Ecke respectively; an opening presentation by host teacher Beata Führbacher and her class in Ingolstadt; an exhibition with spotlights on harp maintenance and restoration; and a special focus on the music of Paul Patterson in the presence of the composer. It is not often that you get the chance to spend two days immersing yourself in the music of one composer, with that composer – and you need a specialised event to do that, as the general public usually require a broader focus. 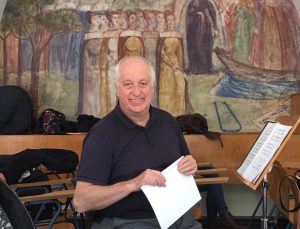 Paul Patterson at his masterclass in Ingolstadt

Speaking of inside/outside, Paul Patterson is a wonderful source of inspiration and support for harpists. He not only makes a fantastic contribution to our repertoire, but attends a great many events. This steady interest, generosity and affection from a mainstream composer is intensely valuable for an unusual instrument. Patterson has come to know the harp so well, that he composes as idiomatically as if he were a harpist. Yet he is also not a harpist, and his masterclasses flag up what we harpists sometimes unconsciously do, that is not musicianly for another musician. The harp’s resonance and tendency to spread chords can lead to unrhythmic playing. Or we do not bring out the contrasts of extended techniques enough, because we have our ears against them all the time. We forget that they are something new for our audiences, and need to make a real impact.

Done well, the chance to come together and engage with our instrument at a specialist level is in fact what helps us go beyond our niche. If you want to benefit from this – support your national harp association! They’re unpaid, they’re sometimes unthanked, but you will find a wealth of interesting and helpful resources at their events and in their journals and e-zines. It’s possible to download and order bulletins from the French harp association from as far back as 1967, via their website. 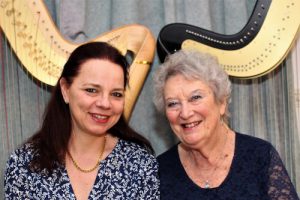 Anne Ricquebourg and Marie-Claire Jamet, who will perform the opening concert at the 50th Festival d’été de Gargilesse

Paul Patterson will also be the featured composer at this summer’s World Harp Congress in Hong Kong. Harp associations strongly influence festivals and conferences, raising awareness and recognition of those who have made outstanding contributions to our instrument. Around the same time as the birth of the French harp association, Pierre Jamet also founded the Festival d’été de Gargilesse.  Today, it is organised by Anne Ricquebourg, president of the French harp association. This year, over sixty harpists will join her in celebrating the festival’s fiftieth anniversary.  With twenty-five performances between August 5th – 20th, you will have the chance to hear artists from all over the world: France, Germany, England, Italy, Holland, Belgium, Switzerland, Armenia, Korea, Japan, Mali, Venezuela…the programme is like a roll-call of the greatest names in the harp world, and stretches across all periods of harp history and musical styles. The historically-minded can also take in “Pierre Jamet, a century of the harp”: a special exhibition with photos, posters, press articles and video material, about the festival and Jamet’s complete oeuvre.

The box office is open, very reasonably-priced (as is usually the way with events linked to harp associations), and with a special offer on joining the French AIH.

10th Camac Trophy, Lorient Interceltic FestivalWe’re all going on a…