Kalevi Aho is working on his 31st concerto, and indeed has written at least one for every instrument of the Romantic orchestra. These include two for harp: the Double Concerto for Cor Anglais, Harp and Orchestra (2014), and ‘Mearra‘, a chamber concerto for the same scoring as the Debussy Dances. The advantages of this will be obvious to every harpist, and hopefully many a manager; it would be nice to count the number of frequently-programmed harp concertos on the fingers of more than one hand.

On September 16th, Mearra will receive its Finnish premiere, with Anneleen Lenaerts, St Michel Strings and conductor Erkki Lasonpalo in Mikkeli. “Since the combination for harp and strings works so well and I was looking for an addition to [the Debussy Dances] to play in concerts, I asked Kalevi Aho if he would be interested to write a work”, says Anneleen Lenaerts. “Kalevi Aho is one of the most important composers of today, and I admire how he always knows how to find innovative and refreshing ways to let an instrument speak, totally different from what one expects, but still so true to its nature.” 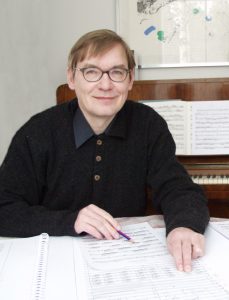 “Debussy’s Dances had no influence on Mearra”, Aho notes. “The only common thing is the instrumentation: the solo harp with a small string orchestra. I wrote the piece in the far North, on the Ice Sea, and there are more influences from the very northern environment. The title is in Sami language (a minority language in North Norway, Finland and Sweden), and it means “The Sea”. Also, the titles of the three movements are in the Sami language: 1. Eanan (= Earth); 2. Dolla (= Fire); 3. Mearra (= Sea). The instrumentation of Mearra is so small, because I wanted to create music also for good chamber orchestras with only a few string players, like the Mikkeli City Orchestra or Lapland’s Chamber Orchestra in Rovaniemi/Finland.”

Aho – described by David Fanning in Gramophone as having “a strong claim to the title of greatest living symphonist” – employs considerable fluidity between his symphonies and his concertos. “Some of my symphonies are really concertante symphonies, with solo instruments, and my concertos are mostly quite symphonic from their character. The reason for writing so many concertos, for all instruments, is that some of my concertos or concertante symphonies (especially the 9th Symphony, the Flute Concerto, the Clarinet Concerto and later ‘Sieidi’, Concerto for Percussion and Orchestra) have enjoyed successful performances, and then musicians of other instruments have asked me to write concertos for their instruments, too. 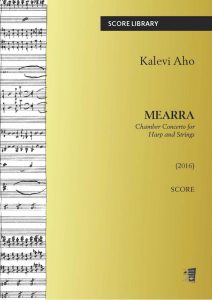 “That’s exactly what he does with Mearra”, Anneleen Lenaerts continues. “It’s a work that represents earth, fire and the sea in three movements that are connected to each other, and it’s a wonderful journey to see and feel how he colourfully connects those elements in music. I’m very excited to perform Mearra in the country it was born!””

The plurality and breadth is characteristic of Aho, and his “openness to the world of music and the world at large“. For many years, he has been a keen critic of absolute music: in the Finnish Music Quarterly (2009), he describes how “the purebred aesthetics of Modernism has led to a situation where any meaning other than musical is prohibited…in this shape, Modernism has become so firmly institutionalised that the entire genre of concert music has been marginalised.” Where contemporary music is in crisis, it is because audiences can find no relevance to themselves within it. One of the functions of art is to make us feel less alone: “A composer should write all sorts of works, so that something will always evoke an echo in people in different life situations. Music should come to the help of people in distress or give them an experience of beauty”, in Aho’s words.

Nor will new music accompany audiences as they live out their lives, if they never get to hear it. Aho has described Finland as “the best country in the world for a composer“, because new music is often performed, and repeat-performed. Thanks to the far-sighted Robert von Bahr in nearby Sweden, Aho’s Gesamtwerk continues to be recorded on BIS, creating the sort of committed discography rarely afforded today’s composers. In Finland’s wide and open spaces, the weight of tradition is still unoppressive, less likely to drag programmes back to the safe, and away from the new.

With Aho’s publisher, Fennica Gehrman, harpists are in luck: the score of ‘Mearra’ is available to view.