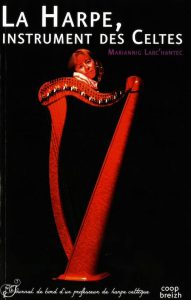 Alan Stivell played a crucial role in the revival of the Celtic harp from the start of the 1950s. Because he appeared at grand-scale events and on famous stages, he caused the harp to heard by a large public. However, this fine development would doubtless never have seen the light of day, were it not for the wonderful contribution from the harpists of Telenn Bleimor – for example, Denise Mégevand (who directed the Telenn Bleimor ensemble and taught numerous harpists), Madeleine Buffandeau, Rozenn Guilcher, Brigitte Baronnet, Kristen Noguès, Françoise Johannel, and Mariannig Larc’hantec.

Mariannig has now published a book, « La Harpe, Instrument des Celtes – Journal de bord d’un professeur de harpe celtique » (‘The Harp, Instrument of the Celts – Diary of a Lever Harp Professor’). In it, she retraces her story and her experiences, which are closely connected to the history of the lever harp. As Mariannig remarks, “The history of the lever harp in France in the twentieth century, this is part of my own history.”

She recounts her meetings with Micheline Kahn, Jacques Higelin, Polig Montjarret and Marlène Bouchard; her débuts with Telenn Bleimor, and her appointment to the Brest national music school, in September 1972, as teacher of “piano, harp and local music” (!). She also talks about how she introduced traditional music to this school; her participation in the Killarney competition; her creation of the Kan ar Bobl lever harp competition in Brittany; and the birth of some important music schools (Le Vésinet-Le Pecq, Lannion-Perros, etc). Particularly owing to her experiences at the heart of Telenn Bleimor, Mariannig was able – little by little – to realise a new way of teaching music, and a different way of looking at the lever harp. Mariannig also collaborated closely with Camac’s founder Joël Garnier. Reflecting, thinking, creating and improving the instrument together, after many months of work they arrived at our first Mélusines. 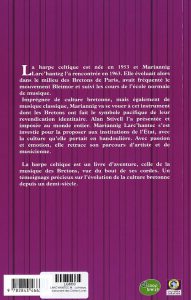 Today, the lever harp has developed very well. It is widely taught in music schools and conservatoires, many arrangements and compositions are written for it, it is easy to find lever harp concerts to attend, and there are even international festivals devoted to it. It is hard to imagine that seventy years ago, all this had yet to be done. In her book, Mariannig describes how the harpists of Telenn Bleimor began from next to nothing, gradually constructing a technique, a repertoire, a way of teaching and also improving the instrument. Over the years, the lever harp has been freed from the straightjacket of its former identity. As Mariannig explains, “in the pan-Celtic spirit that dominated the Breton community in Paris, the harp was integrated into the revolt about culture and identity which rumbled among them.”

Mariannig discusses the development of lever harp pedagogy in detail. Nowadays, teachers easily perceive the importance of a specific lever teaching method, collective practises, the roles of creation and improvisation, the links to cultural programming, multi-discipline work, school education and cultural and social locations. This was not always so obvious!

Mariannig provides us with a fantastic witness, full of anecdotes, humour and feeling, and also a lot of reflections and questions. As we begin the new school year and our pupils return from the holidays, this book evoked many warm memories for me, and turning points in my life as a young musician. It has also sent me back to all the subjects which most teachers are constantly thinking about: pedagogic approaches, the relationship between traditional and classical music, between oral and written methods, and what balance to convey to our students…reading this book, I am reminded that even in a different context, with greatly evolved tools, teaching continues to require eternal inventiveness, and constant re-assessment.