Congratulations to Máire Ní Chathasaigh, who is on the cover of the German journal Folk Magazin. Thank-you also to Folk Magazin who has kindly allowed us to republish the interview in full (at the end of this article), for all you German speakers.

Máire is an internationally-recognised exponent of traditional Irish music on the harp. She has made it her life’s work to research and develop Irish music.

“The harp had been an incredibly important instrument in Ireland from the Middle Ages until the nineteenth century, when there was a move towards a more European style of playing”, Máire explains. “Traditional methods of playing wire-strung harps with the fingernails were superseded in the 1800s by the development of a non-wire strung harp called the “neo Irish harp”. The 1800 Act of Reunion also had a bad effect on traditional musicians. Previously, harpists had been supported by aristocratic patrons, but after the Act all landowners of British origin abruptly decamped to London, causing a massive decline in patronage.

At the end of the nineteenth century came the so-called Irish Revival. Somewhat like the Breton Celtic Revival some fifty years later in France, the Irish Revival was, for all its interest in the roots of Irish culture, a middle class urban movement, beloved of political-literary-arty types. The city intelligensia’s daughters – who would have been learning the pedal harp in the eighteenth century – now took up the Irish harp. Up until the 1950s, the Irish harp had therefore lost its roots in the country as a whole, and the oral tradition had practically died out. I realised that what I wanted to do was to try and recover it.

I didn’t have many direct harp sources to draw on. The harp was popular in Dublin, but beyond that, most people only played the music of Carolan. So I took ornaments that were used on the tin whistle, pipes or fiddle, and used them on the harp. This became my basis to play traditional Irish dance music and airs in an authentic style. It is completely normal to do this now – you can’t find a harpist who does not do this – but when I was in my teens, it was the other way round. Then and now, you need a rounded perspective – it’s no good going to the other extreme and playing only dance music and ignoring Carolan and his contemporaries, either.

You also need to find a balance between being informed about traditional music’s roots, and keeping those roots alive today. For over twenty years, I have been in a harp-guitar duo with Chris Newman, and we tour practically full-time. Chris’s background is improvised music, mostly swing, jazz, bluegrass and so on. I had to learn his music, and he mine, and our duo is a mix of styles. I wouldn’t call it crossover, because we don’t mix styles, but any concert has many different numbers.”

Máire and Chris’s album Firewire won Best Celtic Instrumental Album category in the 2009 Just Plain Folks Music Awards – selected from over 42,000 albums and 560,000 songs in 93 genres from 163 countries around the world, making these the largest music awards of any kind anywhere. You can buy this, and all of Máire’s discography, from your one-stop shop for the best harp accessories – the Camac e-store!

Máire has also published two books of arrangements. These books, The Irish Harper Vols. 1 & 2, explain Carolan’s music, a part of the Irish tradition with its own stylistic conventions, very unlike early music of the same period elsewhere in Europe. For further concise and scholarly reading, Máire recommends Joan Rimmer’s The Irish Harp, now out of print, but available in libraries.

Recent Irish TV programmes featuring Máire and Chris are still available on the TG4 server, including Part I of the TV programme “Mná an Cheoil” (Women in traditional Music) on TG4, Máire’s live TV performance with Anne-Marie O’Farrell and Cormac de Barra on “Gradam Ceoil TG4 2016” and their duo performance on “Hup” on TG4. 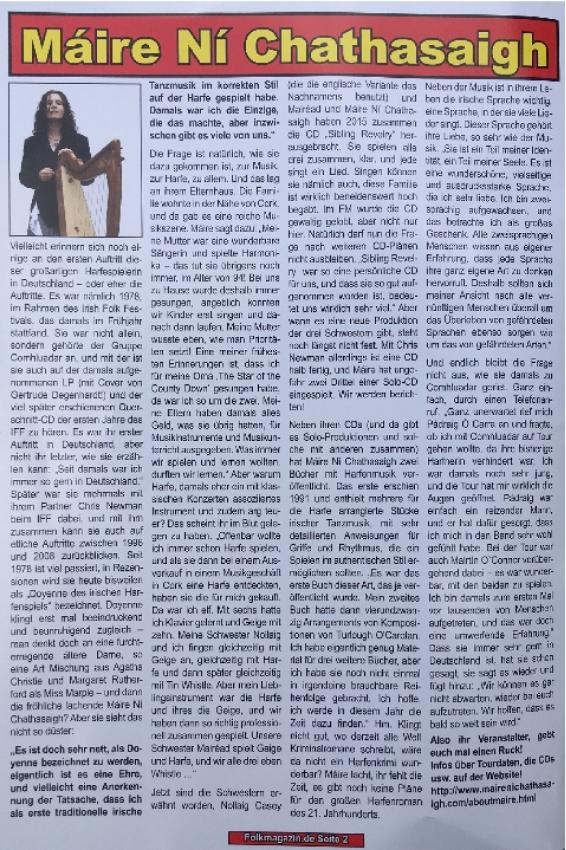