Blog > News > A harpist spends half their life tuning…

A harpist spends half their life tuning…

…and the other half playing out of tune. That’s not quite fair (especially if you get your harp regulated perfectly by the Camac technicians), but who would say no to a self-tuning harp? We’re all still arriving half an hour early, and worrying about the end of the opera when the intonations of band and harp have gone their separate ways.

Nicolas Lynch-Aird and Jim Woodhouse have published two very interesting research papers on the question of how to keep a harp in tune while it is being played. 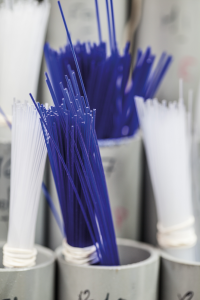 Automated string tuning systems are not new – such as the electronic tuners almost every harpist now uses. But these usually work by plucking the string, then comparing it with the pitch you want to have, programmed into your tuner. You then either adjust the string yourself, or there are some systems where a motor can do this for you. This of course does not help during a performance, and particularly not if the string goes back out of tune before it is next played. Lynch-Aird and Woodhouse therefore examine the question of how to make pre-emptive adjustments to maintain the string’s pitch while it is not being played.

As every harpist knows, there are many variables affecting a string’s pitch, including temperature, humidity, and how long the string has been on the harp. The first paper examines the behaviour of rectified (ground to a precise diameter) nylon harp strings, and concludes that maintaining a string at constant tension may provide adequate compensation against changes in temperature and humidity. Gut and carbon string studies will follow in due course, but it is already clear, and no great surprise, that gut strings are more difficult to predict. It is likely that the most relevant result from the nylon study, for harp auto-tuning, is the stress/strain behaviour, since a knowledge of this is vital to ensure the design of a stable tuning system. 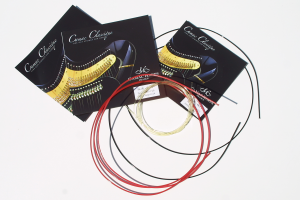 The best approach to controlling the string pitch, especially for gut strings, would be to find a way to measure the string frequency directly. For the second paper, we supplied the researchers with some piezoelectric pickups (of the sort used on all our blue harps). Lynch-Aird and Woodhouse describe how piezoelectric pickups can be used to measure a string’s frequency unobtrusively, when the string is not being played. They develop a model to explain the observed behaviour, and demonstrate how this measurement technique can be used to keep a string in tune – even a new string which is still creeping (settling down).