Regular readers of our communications won’t have missed the fact we just came back from the second edition of Harpes au Max. This harp-tastic long weekend takes place throughout the Pays d’Ancenis, our home part of Brittany.

Many harp events are organised by harpists, for harpists. Every specialist field needs specialist activity, but music is silent without somebody to listen to it. Harpes au Max is unusual because it exists for the regional general public: for our colleagues in Mouzeil, their families, their friends living nearby, for further residents, and as a tourist attraction. It isn’t organised by us. Our President, Jakez François, is the artistic director, but all the logistics – for no fewer than 75 harpists and their harps – are masterminded by the Communauté de communes du Pays d’Ancenis (COMPA).

To what extent a cultural event is publicly-organised varies from country to country. One thing is sure: this is almost never done for the harp. The confidence and the enthusiasm of the COMPA for our instruments and the artists who play them is a wonderful defence of the harp’s suitability for the musical mainstream.

To give you an idea of the intricacy and variety of Harpes au Max 2018, the festival began on the evening of Thursday, May 17th, with a magical mystery tour. Curious travellers got on a bus at 8PM and set off for a Celtic-themed tour, with concerts from Nolwenn Arzel and Adèle Mol. 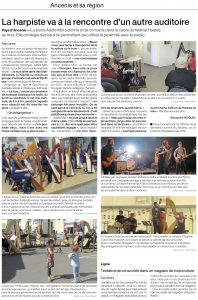 Brittany is a Celtic land along with Scotland, Ireland, Wales and Cornwall, and our commitment to the lever harp is as much cultural and regional as it is artistic or organological. Our company was born in the midst of the Breton Celtic Revival, and to this day we are passionate defenders of the lever harp as an instrument in its own right.

Beyond the mystery tour, the focus on local music continued. Nikolaz Cadoret and Cristine Mérienne performed a “Ballade Celtique” in Loireauxence, followed by Brittany native Marianne Gubri with her Bologna-based Ensemble Lyrae, with a blend of ancient and modern Breton and Irish music. Meanwhile, at the Théâtre Quartier Libre in Ancenis itself, many of our headline artists gave short performances in a private concert for regional officials, our Mouzeil staff, and their families. It was also our opportunity to welcome Isabelle Perrin, festival patron, artistic director of the World Harp Congress, professor at the Norwegian Academy of Music, and formerly of Nantes (fun fact: she taught Jakez!).

After Isabelle’s classical duo with Evgenia Marchenko, we were also treated to Bavarian / Tyrolean Volksmusik from the Moritz Demer Ensemble, beautiful pop singer-songwriting from Addi & Jacq, and the young Ensemble Son Joropo all the way from Colombia. On the first full day of the festival, all our invited harp ensembles began their busy schedule of free touring concerts. The ensembles are a key feature of the Harpes au Max programme: they travel around in buses (each group escorted by two of our strong, handsome and friendly #camacguys to move all the harps…), and perform – everywhere! From the supermarket to the train station, the library to the market square, in hospitals, schools, residential homes, and on the streets, May 18 – 20 saw groups of harps springing harp all over the Pays d’Ancenis. We were thrilled that the following ensembles jumped at this challenge: Ensemble Lyrae (Italy), Ensemble Son Joropo (Colombia), Harporetum (France), the Swinging Harp Sisters (the Netherlands), Trinity Laban Harps (London), and Harpes en Loire (France). Congratulations to them all for their enthusiasm and stamina, giving a lot of pleasure to a lot of people who might not otherwise consider attending a concert.

Friday night’s headline acts began joyfully with the opening of the festival village, in front of the Ancenis Theatre. Here, local artisans displayed their work. Familiar faces like Jocelyne Réal (the inlay meilleur ouvrier de France behind our Canopée Concert Grand), Sophie Poyer (who hand-paints our soundboards) and Jean-Bernard Jouteau (artist sculptor of our Art Nouveau, Oriane and Trianon harps) were joined by other craftman of the region. Some had joined forces to create a special lever harp for the occasion. This harp was raffled off to schools, so one lucky harp class is now the proud owner of this unique “magpie” Mélusine. In the middle of the festival village was a large open stage, on which the Christine Lutz Quartet performed gipsy jazz in beautiful sunshine – the party had well and truly begun! Following the village opening, we entered the theatre for pop harp with Addi&Jacq (USA), followed by the Paige Su Trio all the way from Taiwan. A few kilometres away, the Celtique Trio of Nolwenn Arzel, Loïc Bléjean and Yvon Molard performed on harp, Uillean pipes, low whistle and world percussion. If neither pop nor Celtic were your thing, you could listen to rock harp in Mésanger, with Nobody’s Cult and After the Bees. By 11PM, we regrouped in Ancenis for the first two late-night jazz concerts with the fantastic Charles Overton and his quartet, also over from the States. Saturday morning dawned bright (the sun always shines on Harpes au Max, as if it didn’t in fact happen in the rainiest part of France), with a classical recital by two brilliant – and brave – young concert harpists from Isabelle Moretti’s class at the Paris Conservatoire. Congratulations to Mélanie Laurent and Léo Doumène for their beautiful performances! Their sold-out hall happily contained not quite as many harpists as usual, but still with enough big names in the front row to strike fear into the most robustly talented soloist.

Those who had missed gipsy jazz with the Christine Lutz Quartet on Friday had another chance to hear it, in Trans-sur-Erdre, and there was also a further classical concert in Ancenis’s famous Chapelle des Ursulines. We were delighted to welcome two international competition winners: Evgenia Marchenko (Russia, first prize in the Wales International Harp Competition 2018), and Yu Ying Chen (China, first prize in the 19th International Harp Contest in Israel, 2015).

Saturday evening obliged us to divide and conquer, with several exceptional evening concerts running simultaneously. In Vallons-de-l’Erdre, a traditional beer hall had been set up, for a night of eating, dancing, singing and celebrating with the Bavarian-Tyrolean Moritz Demer Ensemble. It was in Southern Germany that Camac’s founder, Joël Garnier, discovered the single-action Volksharfe – and this inspired him to begin making his own pedal harps. Moritz Demer, director of the Wastl-Fanderl Schule in Munich, and his colleagues Reinhard Gusenbauer and Koal Dumfart, opened the doors for us to the Volksmusik world.

Far removed from the Oktoberfest clichés, this music spans South-East Bavaria, Upper Austria and the Tyrol. It is fascinating to take a look at it, not least because of the parallels with other forms of traditional music. As in the Celtic lands or among harpists in South America, Volksmusik was originally transmitted orally, with many autodidacts. At some point, harpists began standardise, for example by creating written methods – and harp makers did the same.     In Salzburg, it was Berta Höller who, encouraged by the harp maker Franz Bradl, wrote the first such Volksharfe method. In his turn, Bradl standardised both the pedals and the string colours, for neither seven single-action pedals, nor red Cs and black Fs, had consistently been the case before. It is easy to see the parallels with the work Edmar Castaneda has done with us, in creating a Llanera harp with standardised string colours, levers and reliable intonation. The close contact between harpists and harp makers raises the level and opens new doors to artists; it’s not surprising that when this happens, the scene starts to boom. Today, there are 217 public and private Volksmusik schools in Bavaria alone, with 877 current  harp students.

Meanwhile, back in Ancenis, JeanJeanne and Edmar Castaneda’s World Quartet were stunning their audience with the brilliance of their unique musical universes. JeanJeanne fuses traditional Celtic music with rock, classical and contemporary idioms; Edmar Castaneda has rocketed the Colombian-Venezuelan llanera into contemporary Latin jazz. The evening finished late again, with another incredible, midnight concert from the Charles Overton Quartet.

Parents of small children are rarely up past midnight, and the Harpes au Max programme was not only aimed at night owls. On Sunday morning, the Cinéma Eden in Ancenis opened its doors for a new creation by François Pernel: Zdeněk Miler’s cartoon  “The Little Mole”, set to François’s original music. This was a pleasure for both young and old(er)! Continuing the focus on Youth, the winners of our 2017 lever harp competition, Dasson an Delenn, performed twice at the Château d’Ancenis. Congratulations to Antonin Juhel, Klevi Montfort-Perrin, Adèle Etaix and Adrien Daussy, who left us in no doubt that the next generation of lever harp concert artists is alive and well and living in Brittany. It should also be noted that both sets of concerts by young artists (classical, and Celtic) were programmed twice, because of their great success in 2016. The Camac A&R team were relieved to be able to get a seat this time…

On Sunday afternoon, all the ensembles gathered at the Ancenis Theatre, and we all had a chance to hear some of the programmes they had been performing so energetically all weekend. The festival village was as packed-out as the hall, and after the concert in the auditorium, each ensemble took to the open stage for one final show!

The final event (well, final apart from the afterparty…but that’s another story) was a stunning classical concert, the second with Evgenia Marchenko and YuYing Chen.

As well as the outreach concerts, performed by all the ensembles, and the headline acts, Harpes au Max featured several lectures and workshops throughout the weekend. Many of these took place in regional libraries (Ancenis, Mouzeil, Pannecé, Loireauxence, Vallons-de-l’Erdre, Joué-sur-Erdre, Le Cellier…), and spanned subjects from Alpine Volksmusik, South American harp, French chanson, dance, and collective improvisation. Robert Adelson, curator of the exhibition of our private collection at the Ancenis Château, was also in situ giving guided tours of our historical instruments. The COMPA had also organised an education programme for schoolchildren of the region, which saw over 700 students experience events designed especially for them.

It will not surprise you to read that at the end of this second edition of Harpes au Max, we have the feeling that organiser-in-chief Hélène Challain and her colleagues know more about the harp than we do. To return to the subject of parallels in the harp history of different genres: we learnt from Moritz Demer that regional officials played a big role in the development of the Volksharfe. It was often linked to other aspects of local culture, such as traditional costumes and artisan produce. Influential pioneers of the instrument (Tobi Reiser, for example) often led, or were part of associations to promote all these. Music is an expression of culture, and culture is an expression of the people who live in it. That is why culture is important. It is also why, above all, regional cultural events are important, and arguably why state/public organisation of cultural events is important. You have to bring culture to people, in order to make it accessible to as many as possible. This is a much more effective way to make music accessible, than is to interfere in the music itself (as with dubious, crossover versions of classical masterpieces, which never hold attention for very long). At the end of the festival, we were delighted to hear that even more visitors had attended Harpes au Max 2018 than during the highly successful previous edition. Audiences, specialist or not, are not stupid, and would rather experience music – whatever be the genre – well, and where they are at home.