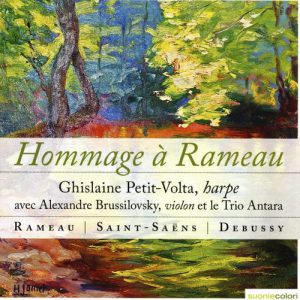 Ghislaine Petit-Volta – professor at the Paris CRR and the Pôle Supérieur d’Enseignement Artistique Boulogne-Billancourt, has brought out a new CD, in homage to Rameau. It begins with Ghislaine’s solo transcription of the first book of Rameau’s Pièces de clavecin, before branching out into chamber music, Debussy and Saint-Saëns. It was Saint-Saëns who first edited the Pièces de clavecin, in 1895; Debussy was also an enthusiastic supporter of the revival of interest in Rameau. “So it is a collection of different homages to Rameau”, Ghislaine explains, “as well as my own.”

If you want to bring out a harp disc of impressive musical substance and not only of works that have been recorded eight million times before, it is practically impossible to avoid transcription. Nor is there much reason why you would want to: the lessons of history inform the present, but purism for its own sake arguably cuts off its nose to spite its face. “Harpists have played transcriptions ever since the dawn of the instrument’s existence”, Ghislaine remarks. “Not just because of a paucity of original repertoire, but because the harp is an ancient instrument and it was much more common to adapt and improvise in early music.” The question is not about transcription per se – a work of art does not have to be a museum piece – but how to do it well. Rameau’s delicate, refined music adapts beautifully to the sound of the harp.

Ghislaine is accompanied in this lovely record by her colleagues from her Trio Antara, Odile Auboin and Emmanuelle Ophèle, as well as Alexandre Brussilovsky.