Eduardo Betancourt with his Camac llanera

Many thanks to Maestro Betancourt for his kind words about our llanera harps!

Eduardo Betancourt is an artist with over twenty years of professional experience as a producer, arranger and multi-instrumentalist in the field of traditional Venezuelan music. He has given llanera concerts and masterclasses all over the world, from Colombia to London, Vancouver to Paraguay, along the length and breadth of the East Coast, in Chile, Argentina, Bonaire, Peru and Cuba, and even in Namibia, Johannesburg and Mozambique. He has represented Venezuela at international festivals including the first Festival Mundial del Arpa in Asuncion; Mishquila de Arpas inSantiago del Estero; América en Cuerdas, Buenos Aires; Festival del Arpa en Cerrillos, Mexico City; Festival Internacional del Folklor, Cosquin; Arpas al Sur de Chile; three editions of Sonamos Latinoamérica (Santa Fe, Caracas, Lima); Carnaval del Sol, Vancouver; Arpegios de la Primavera, Tokyo, and many more.

Eduardo Betancourt currently produces, directs and performs in important Venezuelan music projects, such as in bands for Rafael Brito, Huascar Barradas, Ismael Querales y sus Bandolas, Rey Armas, Ronald Punch, 1492, etc. He has also had a duo for over five years in Buenos Aires: piano and harp, Luna&Betancourt, with Gabriel Luna. Gabriel Luna is a classical pianist, and professor of traditional music at the Conservatorio Nacional de Música in Buenos Aires. 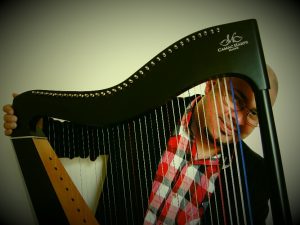 “For me, Camac’s llanera harps are symbols of progress and innovation. They constitute a step forward in the evolution of the arpa llanera in Venezuela, Colombia and the world, without displacing the instrument from its original form.

Camac’s new model has given me great practicality. I can handle the modulations of every type of repertoire effortlessly, thanks to the advantages offered by the harp’s efficient and useful levels. It is possible to play all keys and accidentals much more easily, thanks to this tuning system.

I have been performing traditional Venezuelan music for more than twenty years. I used to spend a third of each performance tuning! I used to lose a lot of valuable time in between each song, and there was no guarantee of precise intonation.

Also, in major music fusion projects, where folk music is not always played, I had to use two or more harps for interpreting works in different keys, because of the great difference between sharps and flats.

Now I can enjoy every concert even more. I can be 90% confident about the tuning, and enjoy the satisfaction of being able to give a higher quality sound and overall performance, as well as having a visually flawless instrument.

I have introduced and recommended this magnificent instrument to my colleagues. I have been so impressed by the advantages of the Camac llanera, that I gladly work to stimulate the interest in this model.

I am using the Camac llanera in all my projects, and can play a very special role, thanks to my instrument’s magnificent functionality.

One example of these projects involving the Camac llanera is a recording I am making in Buenos Aires, with the Argentinian pianist Gabriel Luna. We are fusing the folk music of Venezuela and Argentina, with a twist. For example, one of the (thus far) twelve tracks is a version of Hugo Blanco’s Moliendo Café, arranged by Joaquin Betancourt and myself, with the Argentinian virtuoso guitarist Luis Salinas as special guest.

Together with Venezuelan virtuoso harpist Leonard Jacome, I have created the duo 2Arpas4Manos. Our duo consists of two Camac llaneras – one electric, one acoustic – accompanied by cuatro and drums. The harps are the leading voices in the band, thanks to their powerful bass registers.

My sincere congratulations to Les Harpes Camac for their initiative. I one hundred percent recommend their llanera harps to everyone reading this. They are magnificent instruments you will not regret!”