Blog > News > Our llanera Edmar Castaneda – the story so far…

Our llanera Edmar Castaneda – the story so far…

The llanera harp is native to the northern part of South America, that is, Venezuela and Colombia. Unlike the Paraguayan harp, where the strings are fixed through the centre of the neck, the llanera’s strings are fixed on the side of the neck, and their overall tension is lower. We have combined the llanera’s traditional build and string tension with wrapped bass wires for better intonation and resonance, concert harp spacing for greater ease of playing, an improved soundbox and a rich, balanced acoustic sound. Our harps are also the first llaneras to have levers, unlocking more chromatic potential for the contemporary directions Latin American music is taking today.

The development of our llanera models has been an amazing musical and technological journey, which we couldn’t have made without the help of some fantastic artists. The journey is far from over, but we have, at least, taken off from Charles de Gaulle airport.

To begin with, Jakez describes how it all began!

“I have always been fascinated by the Latin American harp. I have a few such harps in my collection, and I had always hoped that maybe I could work on such an instrument one day. The idea I had in the back of my mind was to create a harp with a similar look and sound to the Latin American harp, but which could be playable with our “classical” technique.

This idea remained just an idea until one day, a harpist friend of mine was staying with me, and brought with her a video of an extraordinary young harpist from New York she insisted that I watch. 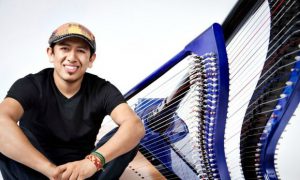 This is how I first heard of Edmar Castaneda. I knew how virtuosic and energetic the music of Latin American harps could be, but I had never realized that it was possible to achieve such a fusion between the energy of the traditional rhythms and the refinement of modern jazz style. This is what makes Edmar unique. Shortly after that, I was able to have Edmar invited to a festival in France, and we met for the first time. I immediately fell in love with his music, and with his instrument. I could not leave the hall during his soundcheck and rehearsal – also because I was translating for him – and after some time, I dared to ask if he would let me try his harp.

Later, when we knew each other better, he told me that he appreciated my interest in his instrument, which was completely unlike an experience he had with another harp maker, who had tried to get him to play on a “proper harp”.

Our collaboration began when I made an electric pedal harp for Edmar, which he plays on his latest CD, Double Portion. 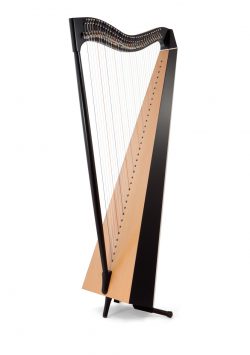 It was during the World Harp Congress 2008 in Amsterdam that Edmar and I really began discussing the possibility of making a Latin American harp. Edmar wanted a reliable harp with levers (which his own llanera did not have). And I was very tempted by the challenges involved in the design and production of a “modern traditional” harp. Everything is different from the harps we are used to making – in fact, the only common aspect is a triangular shape with some strings on it! The strings, their lengths, spacings and tensions are all different. The column is different. The soundbox and soundboard has nothing to do with the modern Western harps. It was a big project, and it took us quite a few years to achieve a harp that Edmar was happy with.

It was while travelling in Venezuela that I met Leonard Jacome, a very talented young harpist who, like Edmar Castaneda, is also working to develop a modern repertoire for the harp. Leonard convinced me to produce an electric version of the llanera. He now owns the first harp of this kind, and so far we have made a further two, one for Edmar and one for Celso Duarte.

During the next World Harp Congress in Vancouver, I met an amazing group of harpists from Venezuela and Mexico. One was Eduardo Betancourt, the famous Venezuelan harpist, who now owns a Camac llanera. He was sharing the stage with Eduardo and Celso Duarte, father and son. They all impressed me so much with their ability to adapt to any kind of harp, spacing and tension, and to perform on harps they did not know as if they had been playing them for years. Their relationship with the harp is extremely natural – something most classical harpists have lost, probably due to the complexity of the repertoire and the size of the instrument.

Joël Garnier, Camac’s late founder, was a great fan of the Latin American harp. Camac’s name even has Latin American roots, inspired by the Inca god Pachacamac, a creator god.

I visited Celso in Mexico, and while we were discussing our own interests, projects and dreams, I mentioned the electric llanera that I just designed. Celso was so interested that a few months later, he got his own electric llanera too!