Sophie Bonduelle – aka Sophie La Harpiste – has made a career of combining harping, and clowning. Clowns and music have always been close, and Sophie’s performances all turn around this point. The grand finale of our Belfort Festival will be a show Sophie has created specially for the occasion, together with Hélène Duchaillut and her class at the CRD de Belfort. 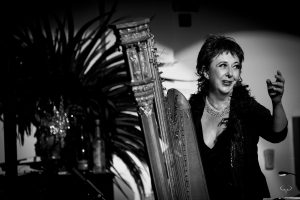 “This has been an extensive project, with several preparatory sessions with the students”, Sophie explains. “Before the holidays, I travelled to Belfort and we worked together on clowning – with red noses, but without music or the harp. This was to assess the comic potential of each student. After this, Hélène and I choose the music for the students to practice over the summer break. When we all met up again, the students now knowing the music, we were able to match them with different numbers, according to their personalities. Hélène was an essential part of this process, because she knows her students so well and she also seized on my suggestions immediately.

It is not as easy as it might seem to be a good clown. Behind the red nose, you have to accept to let go of yourself, to the point of ridicule. We worked on the idea of a musician making mistakes, which is a perfect subject for a musical clown.

Clowning does not only help young musicians practice imperfection – it also helps them to see it positively. A classical musician’s daily work is to aim for perfection by constantly repeating the same gestures, and there is a very complicated relationship with control and relaxation. I was never a big virtuoso, I had terrible stage-fright as a classical harpist. I found my wellbeing by working on clowning, even if I don’t wear a red nose on stage. This is what I can teach the young musicians – that they can go on stage in different ways, and really enjoy sharing unique moments with a receptive audience. The pupils in Belfort won’t be wearing red noses either. Learning to be clowns has helped them to find their personage. “The students have discovered the universe of the musical clown with Sophie”, Hélène adds, “in what has been an exceptional adventure, and a formative experience. This is not their first musical adventure, beyond the norm. At the conservatoire, and because I want them to discover different styles (traditional and early music, or jazz for example), some of the students have taken part in baroque performances, new music concerts, world premiers and musical storytelling. These projects are particularly motivating and bring a lovely spirit to the class.

The preparation of our show “Belfort Harpists in Full Flight!” has been a lot of work and effort. Thanks to Sophie’s energy, originality and generosity, everybody has thrown themselves into it. The parents have been helping too, moving harps, and lending or even making costumes. The students have had to envisage new ways of working. They cannot hide behind their harps during the show, the performances require a lot of mastery and concentration. I am really convinced of the value of such a project! They will come out of it more grown-up. It is a wonderful chance to be able to perform at the festival!”

“There is a very nice coincidence behind how Hélène and I came to work together on this project”, says Sophie. “I travel a lot by train, which is good for contemplative thought. One day I was sitting in a train and I decided to email harpists further afield than Paris, to see if they would be interested in this work. Hélène was the only one who replied – and what is more, she came to see me perform in Paris. We had a drink afterwards, and we got on brilliantly. One week later, Jakez called me to ask if I would like to do a show for the Belfort festival. He said “and it would be great if you could work with the professor in Belfort, her name is -“…of course, you know who it was! I was delighted, because Hélène understands and believes in this universe. It is very difficult – I would even say, impossible – to benefit from clowning if somebody is not open to it. Hélène is, and so her pupils are too, because they know and trust her.”

The content of the show must remain top-secret until its performance, which will be on Sunday, October 21st at 17h. Don’t miss it – book here!