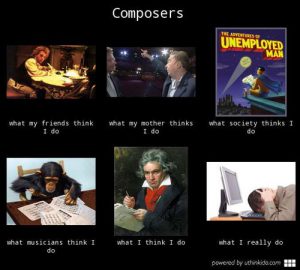 I once had a fight with a well-known German publishing house, who wanted me to add pedal changes to a score I was editing for them. I explained this wasn’t helpful, because every harpist likes to write pedals in differently, and it also depends on your harp and all the rest of it. They weren’t happy about this so in the end, to show them I wasn’t just trying to get out of doing the work, I marked up the changes and told them not to print them. This was a mistake, because they printed them anyway: I suppose they decided it would look more wise or something.

Most harpists have felt their hearts sink when a composer tells them he’s written in all the pedal changes. They will be wrong, and it takes longer to iron out someone else’s pedal mistakes than it does to just mark them as it suits you. There also exist a large number of scores that can only be played by very long-armed harpists, or masters of ten fingers instead of eight: the list goes on. You can get information about what is possible on a harp from an orchestration book. But you cannot really learn understanding from a book, because you cannot hear the harp, or see the harpist playing it.

Composingforharp.com is now live! This online resource for composers and harpists has been created by Sabien Canton and Miriam Overlach, and advises composers about the physical realities of the harp and harpists. Through a series of succinct videos, composers can not only read about, but also see and hear how different registers and gestures work, what impact particular instructions (like staccato) have on fingering and speed, why some pedal combinations are possible but not others, discover special effects, and so on. There is also a collection of downloadable PDFs about notation, a new music score library, and a forum for artists to exchange ideas. Both specialists in contemporary music, Miriam and Sabien have distilled a very broad and complex field down to the most important, fundamental principles – which is a lot more difficult than it sounds.

Composers who deeply get the harp – Britten for example, or Harrison Birtwistle – wrote and write such successful music because they somehow grasp the soul of the instrument. They get under its skin. They create new voices for it which you never knew it had before, but which, once there, you cannot imagine it never having had. They were always there, somewhere in the heart of the harp, waiting to be expressed. Perhaps that is the essence of successful new music.