Changing Tides: Catrin Finch and the blue harp in Ethiopia for WaterAid

Catrin Finch has recently released her new, self-composed album, Tides. This disc is the first time Catrin’s own compositions have appeared as a complete body of work, and the album also features her piano skills. She has gifted one of the tracks, ‘Changing Tides’, to support WaterAid’s work to bring safe water and sanitation to some of the world’s poorest communities.

We recently shipped a blue harp to Addis Ababa for Catrin Finch, who has been to Ethiopia as part of her work as an ambassador for WaterAid.

Catrin writes: “Growing up on the West coast of Wales, my childhood by the sea was one of the main influences on my creativity, so I suppose that’s why learning about WaterAid’s work to help the world’s poorest communities gain access to safe water, toilets and hygiene facilities really resonated with me. Today, over 748 million people around the world still have no clean water to drink, and globally over 500,000 children die every year from diarrhoea caused by unsafe water and poor sanitation. That’s over 1,400 children a day. 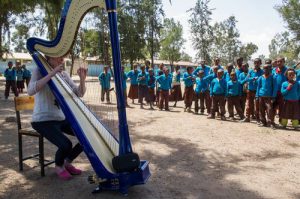 Ethiopia is in the horn of Africa, where an extended period of droughts, famines and conflicts has had a serious impact on health and life expectancy.  Many children die before the age of five and almost half of the population – over 44.5 million people – have no choice but to collect water from unsafe sources.  To date, WaterAid has funded more than 50 water and sanitation projects in Ethiopia, transforming the lives of 1.2 million people with clean water and more than half a million people with safe sanitation, but until safe water reaches everyone everywhere, their work continues.

During my visit I travelled to the rural highlands of the Amhara Region in the north of the country, where I met mother of five, Serawark Woldegebreal.  Her only source of water is a stream around fifteen minutes away from her house, and she makes the journey down a steep path to collect water for her family five times a day.  The queues at the stream and the sheer weight of the water mean that the process can take up to an hour and a half each time. Playing the harp keeps me in good shape, but I found that I could barely lift the full 25-litre jerry can, and I was in awe of Serawark heaving it onto her back and making her way back up the hill to her house.

The local community use the stream for drinking, cooking, cleaning and washing as there are no other water points in the area.  It’s virtually impossible to avoid the stream becoming polluted and making the families sick, because it’s also the only water source for the neighbouring communities living upstream.

I accompanied Serawark on her daily routine and was appalled to see that the water she depends on was teeming with leeches.  I watched as Serawark tried her best to only collect the cleanest water by painstakingly filtering out insects and silt with a jug. Devastatingly, it’s impossible to filter the invisible parasites that cause Serawark and her family to fall seriously ill with diarrhoea.

Perhaps the cruellest element of living without water is that it robs children of their education and chance of a brighter future. When Serawark’s children suffer from diarrhoea they can miss school for up to three weeks to recover, and the long absences have a big impact on their learning.  Serawark told me that her 11 year old daughter, Befigist, is keen to learn and become a doctor, so she gets angry and upset when she misses school and falls behind. 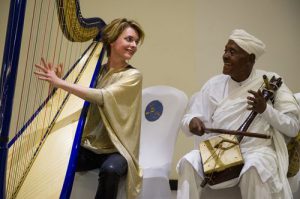 Thankfully, the tide will soon turn for Serawark and her family as WaterAid work with local partners to install taps, toilets and hygiene facilities in her area.  It is a life changing move that will give the community back their time and underpin improved health, education, livelihoods and wellbeing.

I’ve seen for myself how something as simple as water can empower communities and break the cycle of poverty.  Please visit wateraid.org to help make a difference.”