Lovely as the Saint-Säens Fantasie Op. 124 is, there’s possibly only so many times you and your violinist colleague can perform it, before you start to feel like…maybe a change. And here you slam up against Harp Music Issue no. 194(a). appendix I: violin and harp is a lovely combination, but there isn’t an awful lot of repertoire. You can add a Spohr Sonata, Kikta, Damase…but there are few original works that you can really get your teeth into. Flute and harp, for all it’s often less enthusiastically-received by audiences and promoters than violin and harp, has considerably more music at its disposal: Alwyn, Bax, Feld, Heath, Jongen, Liebermann, Rota, Takemitsu, several concertos, etc.

Like many musicians facing this problem, Katrina Szederkenyi and her father, the violinist Nandor Szederkenyi have turned to transcriptions to solve it. More unusually, they are transcribing big works from the orchestral repertoire. They have just released an e-album – “Shall We Dance…?” – featuring many of their arrangements. It doesn’t contain the Saint-Saëns Fantasie at all, and also none of the usual transcriptions, like the Massenet Meditation. Instead, here are the tracks: Weber’s Aufforderung zum Tanz; Un Bal/Symphonie Fantastique; Liszt’s Mephisto Waltz, Shostakovich Moments Nostalgiques from the Jazz Suites 1&2; Salome’s Dance; and Dance of the Hours from La Giaconda. You can download it all on iTunes, here.

Nandor and Katrina make their arrangements together. “We’re united by the fact we both love a challenge”, says Nandor. Both are also orchestral musicians – Nandor has held concert master positions all over the world, while Katrina works in German orchestras. “As an orchestral harpist, I hear this repertoire all the time, but the harp doesn’t always have a big part in it”, Katrina explains. “I wanted to be able to share in this music more fully. And when you’ve played it in the orchestra, then when you come to it as chamber music (or as a solo) you have more respect for the score – you’re aware of all its facets, all the other instruments that would be around you. Musically, it’s dangerous to approach any music from a purely harpistic point of view. We haven’t often the same profundity in our literature, and you can’t learn about a particular aspect of music, if you’ve  never heard it because it never featured in your pieces. One of the best music lessons you can have is to play in the orchestra – and the opera, because of course if you play something in a way a singer couldn’t sing it, chances are what you did wasn’t musical.”

“It’s not only harpists who can be guilty of confining their musical horizons to their instrument”, Nandor adds. “Even with the large violin repertoire, and the even larger piano one, people continually play the same three concertos, the same showpieces…my father was a violinist, with his eyes on a solo career for me. I do a lot of solo, but I also told him I really wanted to play in an orchestra. Because of the music.” 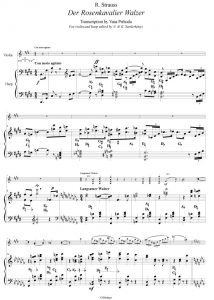 Rosenkavalier Waltz, transcribed and edited by Nandor and Katrina Szederkenyi

“I also really see all our arrangements as chamber music”, Katrina continues. “a harp will often find themselves the accompaniment to a more soloistic duo partner, because it’s a polyphonic instrument. That’s fine, but we also need more complex chamber music in the tradition of a piano trio or string quartet. I’ve also asked my father to arrange some of our transcriptions for harp and string quartet, because we need more literature for that combination too.”

These exciting, virtuosic transcriptions are all available to buy here on Nandor’s website. The violin and harp parts include bowings, fingerings and (good!) pedal markings. Another practical point: for the pieces which have big orchestral harp parts anyway (Berlioz, Weber, Salome…), the harp part remains the same where possible. “I know how frustrating it can be when you’re playing a transcription of something you already know really well, and it’s just a little bit different…”, Katrina points out.

These are – as you’ll see in the excerpt pages on the site – arrangements for professionals, but some easier Puccini arrangements will also be coming soon.