The Camac Harp Days, London 2009, featured three days of concerts, workshops, lectures, parties, on the twin themes of early and contemporary music. This was an idea we came up with after inviting Constance Luzzati to give her London debut at the festival. She specialises in juxtaposing early and new music in her recitals, so we decided to extend her concept to the festival as a whole. It was at the London Camac Days that we also launched our concert MIDI harp. 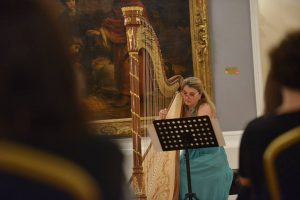 Head of Harp Gabriella Dall’Olio and her chamber ensemble of colleagues from the Trinity Laban Conservatoire of Music and Dance played the opening recital on March 31st fabulously well. Gabriella also chose fabulous repertoire – by no means a given in the harp world – and which is something doubly tricky to bring off in a programme consisting entirely of premieres, as this programme did. Tim Jackson’s Be Not Afear’d is a haunting, deeply serious work after Caliban’s equally beautiful lines in The Tempest: “Be not afear’d, the isle is full of noises, / Sounds and sweet airs, that give delight and hurt not…”. Interestingly, Jackson’s piece exists as a harp solo, or for a chamber group of harp, string quartet, flute and clarinet. It is even more beautiful in the ensemble version, and for those of you looking for repertoire for the same line-up as the one you need for Ravel’s Introduction et Allegro, I absolutely recommend it.

Errollyn Wallen‘s English Folk Songs for voice (sung here by Errollyn herself), harp, clarinet, flute, viola, cello and double percussion is another wonderful work. It’s witty, inventive and moves between lyrical and drivingly rhythmic sections, to great effect. Unfortunately I missed Amir Mahyar Tafreshipour‘s Chang e Rudaki because I had to go out of the concert hall and do something (it’s uncut, this report ), but I do know that his harp concerto A Persian Reflection is excellent. Chang e Rudaki (“Rudaki’s Chang”) is inspired by the Persian poet Rudaki, who wrote over one hundred thousand lines of poetry, and who was particularly fond of playing the chang, and early type of Persian harp. Gabriella performed Chang e Rudaki on the lever harp, so it is a substantial addition to that instrument’s repertoire too.

Excellent, unusual repertoire was the order of the day throughout the festival. If you are interested in early music, don’t miss a chance to hear Frances Kelly, who performed a programme exploring Continental influences on English music, in duo with lutist David Miller. The following day, she also led an excellent workshop on music in England, 1600 – 1660. 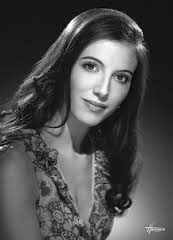 Rhodri Davies unfurled A1-size graphic scores to help us get to grips with Catherine Kontz’s Tea Ceremony, a “guided improvisation” around the ideas of the Japanese tea ceremony. In the evening of Monday, March 30th, Constance Luzzati gave her London debut, with a stunning, virtuoso mixture of early and modern works. Bruno Mantovani’s Tocar is an excellent new solo work, and Constance’s own transcription of Froberger’s Lamentation is a beautiful, unusual alternative to the Bach, Rameau and Scarlatti transcriptions that have made themselves at home in the harp repertoire.

Wednesday, April 1st began with a packed hall and a collaboration with Trinity College of Music’s composition department. The composition students had been working with student harpists, and a Blue Harp Camac had loaned them in advance to work with. Lucy Smith’s “Electric Arc” stood out as an intelligent exploration of electric and acoustic effects, and the dialogue between the two. Oliver Paine proved that serious does not have to mean humourless: his “Beep Test” makes the harpist keep up with electric beeps, the way you have to if you take the “beep test” in the gym.

In the evening, Jakez launched the new Midi Harp. Jakez has dreamed of creating this instrument for the last twenty-five years, and now, finally, his dream has become reality. Assisted by Trinity’s Head of Composition Dominic Murcott, Jakez explained that while a Midi Harp can sound like a piano or trumpet instead of a harp and that is fun, this isn’t the aim of the instrument. Any Midi instrument can sound like anything, because the sound is generated by a computer receiving a signal from the instrument. A harp sounding like an electric guitar isn’t exciting for musicians already accustomed to Midi keyboards, but a harp that can be used in significant engagement with computerised music is something else entirely. It is particularly important in the relationship of live performance and computer music, a relationship at the heart of the music of today.

Following this MIDI harp presentation, Sioned Williams commissioned the first concerto for Midi Harp and Orchestra by Graham Fitkin. This was performed by Sioned and the BBC Symphony Orchestra, conducted by Andrew Litton, at Maida Vale Studio 1 on Wednesday, January 26th, 2011.

Sioned is a pioneer of new music in Britain and abroad. During the Camac Days at Trinity, she also gave an excellent lecture-recital on collaborating with composers to expand the harp’s repertoire: “New Music, Innovation and the Importance of Collaboration”. With the exception of Amir Mahyar Tafreshipour, who Sioned particularly has championed in Britain, all the musical examples she chose were British: Michael Stimpson, Julia Stimpson, Anthony Bolton, David Graham-Ellis, Gareth Glyn, Cyril Lloyd, Patrick Piggott and Sue Rothstein.

Coincidentally, on the same day as the Midi Harp launch, Jakez received the following quote from Cristina Braga. She had found it in Tournier’s La Harpe (1959):

“Progress transforms so many things! What sensational musical metamorphosis will emerge one day…Could not the violin, the harp, the flute become as powerful as trumpets, while retaining the individual expressiveness of their tone quality?”

The final day of the festival, April 2nd, welcomed Isabelle Perrin, who gave a masterclass in the morning for Trinity students, and a concert in the evening. Tamara Young is to be particularly congratulated on her performance of Berio’s Sequenza II, a work fully-fledged professionals often need six months to learn.

Isabelle is an exceptionally disciplined artist: you can choose the musical decisions you make, but you have to have a reason for them, and you need to work hard enough to be able to express them clearly, even for the back of the hall. Perhaps discipline is at the heart of all classical art forms. You need the hard work to make the magic real. Isabelle’s concert in the evening marvelously realised everything she upheld in her masterclass, and met with louder and more sustained applause than I have heard in London for a long time.

For the festival’s final performance, Jakez took to the stage, in a jazz trio with Tim Sampson and Joe Stoddart. They gave us a brilliant display of yet another side to the harp (The Minstrel’s Farewell To His Native Land will never be the same again), with both lever and pedal harps.

Huge thanks to everyone who worked so hard to make this festival happen: to Gabriella Dall’Olio, Frances Kelly and their wonderful students at Trinity; to the artists who came to perform for us so inspiringly; to the composition and jazz students and professors who engaged with our new instruments with such passion and commitment.