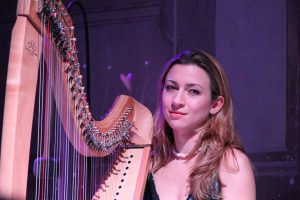 Marianne Gubri is a Breton harpist now settled in Italy, where she has founded the Associazione Arpeggi for the cultural diffusion of the harp. It was under the auspices of this association that the second Bologna Harp Festival took place in February 2016. This time, the festival was all about the lever harp, with an action-packed programme of both Italian and guest artists, and at the heart of its home community in Bologna

“Bologna is one of UNESCO’s Cities of Music“, Marianne explains. “It has a very strong musical tradition, a huge collection of scores and historical instruments, and a lot of resources. I’m pleased to say that from the start, all the harp festival’s concerts and workshops were full houses! As well as strong links with the city, we also benefit from support from the Italian Harp Association, and other festivals, such as the Bologna Jazz Festival. 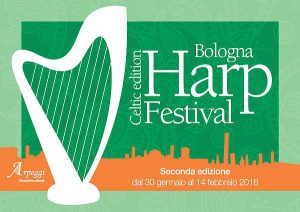 This year, we wanted to explore particularly the lever harp. This is such a creative instrument, and encompasses so many different musical styles – including, but not “only” traditional music. Also, we have over forty pupils in our Association now, and of course a lot of children know the lever harp best. My colleague Irene De Bartolo and I, we always run projects connected to our teaching activities, so our students can experience why they are learning what they’re learning! We aim for a very wide range of events, of interest to both children and adults. It’s also important to me to strike a balance between raising the profile of Italian harpists – who don’t get enough attention – and inviting international artists. This is also very stimulating for the general public, because they can experience how rich and varied the harp world is, both at home and abroad. 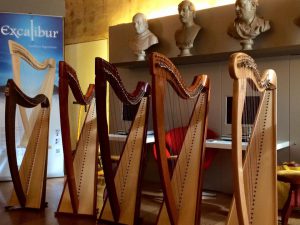 We’re very grateful to Enrico Tartarotti and his team at Camac Italia, who have been at our side many times, lending harps, holding exhibitions, and supporting our activities. Our festival would not have been complete without them, and we were delighted to have their lever harp exhibition at Bologna’s music museum for the duration of the event.”

As well as being an exceptionally dynamic teacher, Marianne is also a busy performer, with an equally wide range of projects. You can hear her in a Celtic duo with Irene De Bartolo; performing Granados, De Falla, Albeniz, Lecuona, and Salzedo with a flamenco dancer; and programmes of Italian and also Japanese songs. She’ll also soon be in Paris with her duo Harp and Hang, an intriguing combination with Paolo Borghi. Their meditative, original compositions are fascinating, with a sonic universe all of their own.

Even if you couldn’t be in Bologna for the festival last month, you can explore the photo gallery below!