Robert Groslot: Concerto for Harp and OrchestraCamac a winner at Prix Image Entreprise 2016 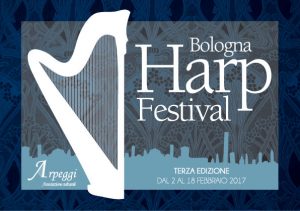 The third edition of the Bologna Harp Festival, organised by the excellent Association Arpeggi, is taking place between February 2nd – 18th, 2017. It offers a fantastic variety of concerts, masterclasses, workshops, a harp exhibition with our partners Camac Italia, all in the some of the most beautiful venues in Bologna – which has also been named a City of Music by UNESCO.

The festival aims to introduce the harp to the general public, bringing the instrument beyond its niche and placing it in wider artistic contexts. This year, the festival is focusing on the modern harp, and how it is used in music therapy.

The concerts will take place in halls such as the Teatro Duse, the Piccolo Teatro del Baraccano, the music museum, the Circolo Ufficiali, and the Auditorium della Nuova Scuola di Musica Vassura-Baroncini de Imola. The programme includes an exploration of popular songs (De Falla, Berio and Ravel), with Davide Burani (harp), Cristina Zavalloni (song) and the Orchestra del Baraccano conducted by Giambattista Giocoli. There will be a concert of twentieth century music with the Morrighan’s Trio, and of minimalist music (Cage, Pärt, Glass, Harrison, Frahm) with Floraleda Sacchi. In the context of world music and sound-healing, the Harp & Hang Duo will perform their new programme Menhir, and Christina Tourin will give a masterclass and concert for the students of Italian music schools and conservatoires. 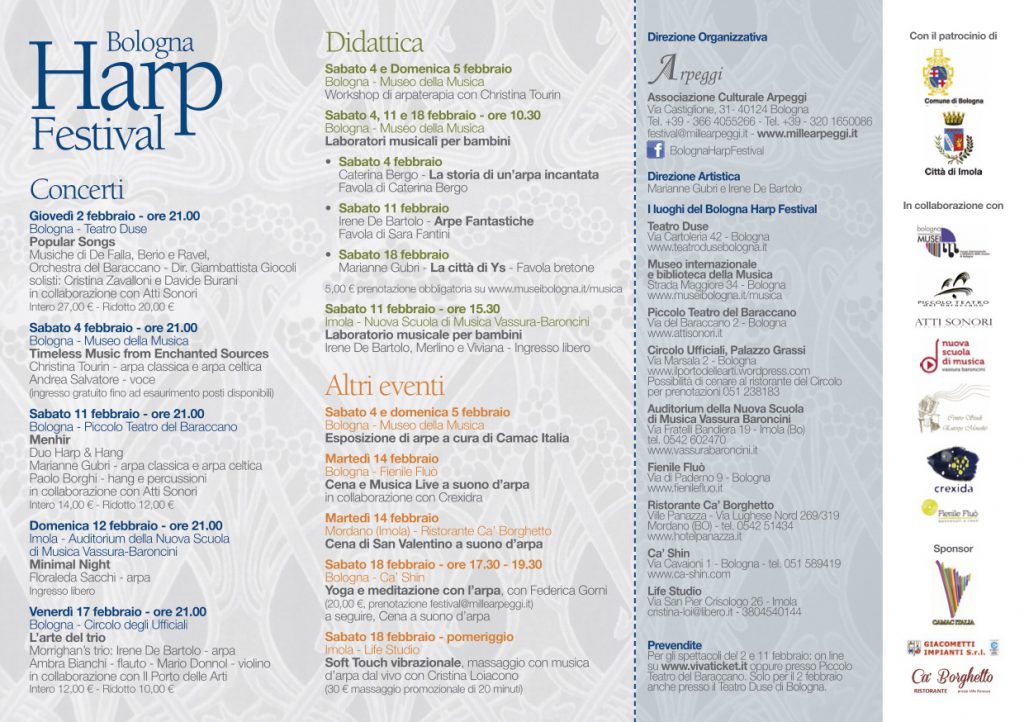 There will also be children’s workshops, as part of the ‘Best of’ series at the Bologna Music Museum. At the Nuova Scuola di Musica Vassura-Baroncini de Imola, young harp students will perform, all from the classes of Bologna, Imola, Cento and San Remo.

Camac Italia, the festival’s main sponsor, will be there with an exhibition, and there will also be plenty of musical-gastronomic encounters at some of Bologna’s most delicious restaurants! Yoga, mediation and massage sessions will also take place, both for individuals and in group classes.

The Arpeggi Association seeks to further knowledge, awareness and study of the harp. Since its beginnings in 2008, it has established many important artistic collaborations, for example with the Italian Harp Association, the TV channel RAI, and the university, theatre and conservatoire in Bologna. The Bologna Harp Festival is directed by Marianne Gubri and Irene De Bartolo.

As well as from Camac Italia, the festival is supported by the city of Bologna, the Museo Internazionale e Biblioteca della Musica, the Piccolo Teatro del Baraccano, Crexidra, the Fienile Fluò, the Associazione Euterpe, l’Associazione Atti Sonori, the town of Imola and the Nuova Scuola di Musica Vassura-Baroncini di Imola. It is also sponsored by Giacometti impianti and the Ristorante Ca’ Borghetto.

Robert Groslot: Concerto for Harp and OrchestraCamac a winner at Prix Image Entreprise 2016