Two years ago, Lara Somogyi ran a successful Kickstarter campaign to fund the purchase of a Big Blue electroacoustic harp. Since then, she’s gone from strength to strength, and we love following her work. 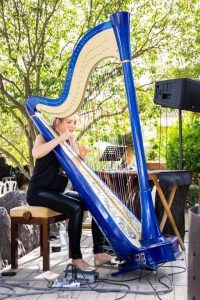 First up, Lara continues to expand her video library of pop covers, created entirely with the blue harp and sound processing. You can enjoy all these amazing videos on her YouTube channel, with the recent additions of Sia/Elastic Heart, and Beyoncé/XO. She’s been playing solo shows and masterclasses in Los Angeles and around the USA, including her Hotel Cafe debut in Hollywood. We were also happy to send a Blue for her to perform at the Sentmenat Harp Festival in Spain last summer.

As well as her solo videos, Lara has been working with other artists and LA YouTubers. She recently worked with Postmodern Jukebox and singer Daniela Andrade on a new take on Gun’s n Roses’ “Welcome to the Jungle.” It’s now had more than 1 million views!

Lara has also completed the recording of a sample library,  as part of the virtual instrument Signal now available from Output. Signal has been nominated for  Music Tech’s Gear of the Year Award, and through it, the Big Blue can be heard on an ever-increasingly number of albums (Coldplay’s latest, for example). 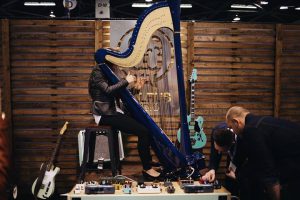 Lara working with partners at NAMM

On the subject of the music industry, Lara writes: “A few weeks ago I attended NAMM (the National Association of Music Merchants) here in LA. It’s a worldwide convention where many different types of music companies (ex. Roland, Yamaha, Fender, etc.) converge. I brought the Big Blue and showed it to guitar pedal companies to experiment with new pedal combinations. It was great fun to introduce the electroacoustic harp to pedal companies who aren’t used to seeing the instrument, let alone an electroacoustic version, using their guitar pedals. I partnered with Walrus Audio, Earthquaker Devices, and Roland/Boss – I’m really looking forward to adding these pedals to my sound and working with these companies.”

Lara was even kind enough to write in and say “The Big Blue has become an integral part of the music I make. Thank you again for all of your support. Camac has completely transformed the way I approach the harp and I’m excited to continue creating on this extraordinary instrument!”

Lara, shucks. The pleasure is ours!