There is a close relationship between South American and early harp music. At the time of the Spanish conquest, the chromatic arpa de dos órdenes was one of the three most important instruments in Spain  Conquistadors, lay colonists and various missionary orders – particularly the Jesuits – all cultivated the harp (and vihuela) with such enthusiasm, that these two instruments prospered more than any others in the early colonisation of South America.

Andrew Lawrence-King, one of the world’s leading performers of early music and the most recorded harpist of all time, is currently touring with Jordi Savall. And…he has been using our llanera! We made this harp for Edmar Castaneda, but Andrew has been to Mouzeil to try it out, and its first concert outing will be on August 14th in Poblet, near Barcelona. The segment featuring the llanera is traditional Catalan folk-songs, the program also includes music from the medieval Cantigas of Alfonso el Sabio, and the Llibre Vermell.

We are amazed and fascinated to watch a wheel turn in full circle, from the plains of Colombia, back to early Spain. Read on to discover more about Andrew’s experience of our harp!
Regulation
“I took the arpa llanera with me on the next long tour (Arc-et-Senans, Fontfroide/Narbonne, Graz, Salzburg). Between rehearsals in Arc-et-Senans, I experimented with the regulation system.
As you said, it’s quick and easy to use. For medieval music, one might want wider semitones (117 cents), but I did not have time to experiment with this. For renaissance and baroque I was interested in narrowing the semitones. The limit of adjustment is when the open string buzzes against the metalwork, at that point one can’t move it any closer to the neck. I found that in the central register, this limit allowed regulating the harp into 1/6 comma meantone (minor semitone = 89 cents), but not as far as 1/4 comma meantone (minor semitone = 76 cents).
1/4 comma is the historical temperament for 16th and early-17th-century music, but is regarded even by many early music fans as ‘extreme’. 1/6 comma is the historical temperament for later 17th and 18th-century music (it’s also appropriate for later repertoires, until superseded by the general availability of equal temperament with the invention of digital tuners). 1/6 comma is also a very useful compromise temperament in modern situations – suitable for renaissance and baroque music without being too ‘extreme’ (i.e. not too far away from the equal temperament that most modern musicians are comfortable with).
So the availability of 1/6 comma meantone on the arpa llanera is very convenient. It provides me with an excellent compromise tuning that will work well for those difficult concerts with a wide range of repertoire, perhaps outdoors and amplified, where the arpa llanera can do what early harps cannot. And it offers students the possibility of an ‘early music sound’ that will not challenge their colleagues too much, but which is completely historical.
In general the suitability of the llanera for early music students is a wonderful, unexpected bonus.
Playing 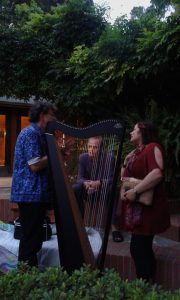 The project in Arc-et-Senans was simply crazy: I had six historical harps to play, from medieval via baroque to an original 1784 single action harp. And the weather there was awful: violent thunderstorms and dreadful humidity. So when an extra rehearsal was scheduled in a different building, there was no question of moving one of the early harps through the rain. So it was arpa llanera to the rescue, and I played a rehearsal of Monteverdi’s Combattimento with it. Although I’m not accustomed to managing levers for such repertoire, the harp did fine: the strong basses blended well with the theorbo, and singer and the rest of the band accepted the instrument without question. We threw a surprise birthday party for Jordi on Monday, with lots of musicians present. These included his daughter Arianna and Colombian traditional/early musician Leopoldo Novoa (who plays harp, amongst many other instruments), and the early guitar star, Xavier Diaz Latorre (who likes to dabble with harps too!). So we brought the arpa llanera from the office for the party, I showed Arianna how the feet attach and how the levers are set up, and…. that was it. They took the harp out of my hands, and were so happy with it that I hardly had a chance to play it myself for the rest of the evening!

Arianna was delighted with the string-tension and spacing, and agreed that the instrument can be a very useful ‘stepping-stone’ towards early harp for beginners, or students with a wide range of repertoire interest. Leopoldo already knew about the design, and was delighted to have the instrument in his hands: he and Xavi provided a harp/guitar jam session of Mexican sones late into the night.
So the harp is already making new friends on both sides of the Atlantic, and precisely in this cross-over area between early and traditional music that (in their different ways) Arianna and Leopoldo inhabit.
Everyone loved the convenience of the built-in pick-up and pre-amp, but we haven’t had a chance to play with that yet.
The harp is super. I hope this note gives you some idea of how enthusiastically the harp is being received, and how well the instrument works in repertoires for which it was not originally designed. Clearly, historical Hispanic music is in this harp’s DNA!”
Andrew Lawrence-King
For those curious about early music in general, you can do no better than to sit down and peruse Andrew’s fascinating blog. It is a mine of information, and also of perception: an amazing window onto a world of ideas and philosophies that are not only interesting in their own right, but also inform the present.
A l’Aube de la Harpe Celtique : Carte Blanche à Mariannig Larc’hantec et François PernelThe story of our soundboards