A chrome-mirror harp for Caroline Lizotte

We are very proud to have created a special Big Blue electroacoustic concert harp for Caroline Lizotte – with a pure chrome, mirrored finish. When the harp arrived in Montreal, Caroline wrote to Jakez: “I have been gazing at its reflections for three days now, and reflecting too that I was really spoiled in being able to collaborate on this crazy project with you ! You should be proud of it too, I have every respect and admiration for you. This harp is a perfect image of our friendship, determination, audacity and our freedom!” 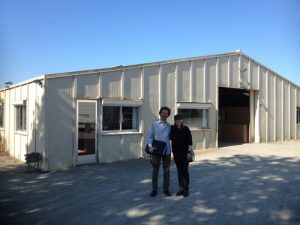 We have been making chrome-plated harps for a while, but Caroline’s harp finish presented a particular challenge because of the very clear mirror effect we all wanted. Before we started, we had to research and seek specialist advice about this process. We would be lying if we said this was also the quickest project we have ever brought to fruition, but the results have been worth the wait. Caroline continues: “You well know that before connecting it, I couldn’t resist exploring it acoustically and I must say I am very impressed by the sound. The bass is deep and has great soul, I love the middle register – it is absolutely exquisite – and I find the top subtle, with the flexibility that will take sound processing well.

And then, connecting it up! In these few days I have rediscovered the intense joy that I experienced in Vancouver in 2011 – I am finally back with such a powerful harp, which could fill the Forum de Montréal all by itself!

Now I am familiarizing myself with its electric side, with the incredible possibilities afforded by its four outputs. I have a life’s work ahead of me unlocking its technical and its physical potential, and there you have it, I am happy!” 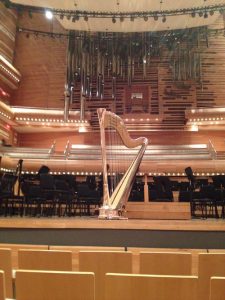 The “Mirror Harp” safely arrived in the Maison Symphonique, Montreal

Caroline has been dreaming of a harp like this ever since she was seventeen. In the 90’s, she joined her brother’s rock group Mange l’Ours Mange, and amplified her acoustic harp herself as best she could with all kinds of pickups. If you have ever tried to do this yourself, had a sound engineer crying as he or she tries to do it for you, or if you have read Jakez’s Blue Dictionary – you will know that it is not easy to amplify an acoustic harp successfully. Especially not for rock, where everything is highly amplified, including problems. “Nonetheless, I knew this was a musical direction I wanted to continue”, Caroline says, “and all the experiements I had to do with microphones and sound effects also influenced my compositions.

At the beginning of the noughties, I started playing with the techno group Eden 106. This inspired me to write my Concerto Techno for harp, live techno and orchestra in 2003, which techno parts were created and performed by Guy Pelletier, founder of Eden 106. And of course it also widened my experience with the amplification of a harp. It was also during my techno phase that I started to dream of a chrome-plated harp. I covered my black, acoustic harp with chrome-finish Mactac, which was better than nothing. 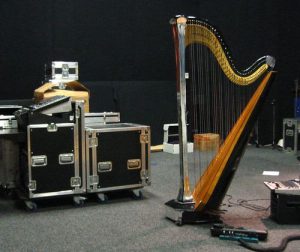 In 2008 I was invited to perform at the World Harp Congress in Amsterdam, and while I was there, I also heard Edmar Castaneda give an extraordinary concert on the Camac blue harp (in silver finish). The next day, I went straight to the Camac exhibition. I was bowled over by the blue harp – it was exactly what I had been searching for, for so long.

When the next WHC came around, this time not so far from home, in Vancouver, I was able to borrow a blue harp for the performance of my Concerto Techno. That settled the matter – I had to have one, and I ordered it mirrored. Fortunately, Jakez was willing to collaborate with chromeurs to realize the idea. It’s the first mirrored electro-acoustic harp in existence!

Performances, compositions and developments in instrument manufacture all support and energize each other, and I feel rejuvenated by the arrival of my new instrument. I’m currently working on my compositions specifically written for electroacoustic harp, and on the new possibilities I have with it as opposed to an amplified acoustic harp. 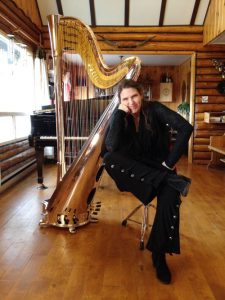 For example, in April 2015, I will give a concert of my own compositions – “Lizotte plays Lizotte” –  among them I will give the world premiere of my Danses Métales opus 47 for electroacoustic harp, a series of miniatures that I have composed in the 90s  on an amplified harp; my husband and multi-instrumentalist Étienne Ratthé and I will also perform the chamber version of the Concerto Techno opus 40 ; harpist Éveline Grégoire-Rousseau will join me for Stellae Saltantem opus 49 for acoustic harp and electric harp, a recent commission from the Atlantic Harp Duo.

I am very interested to expand the repertoire of the electric harp, and I can finally make it since I have now the instrument in hand!

I still have to pinch myself to check that this great dream of mine, which I have had for more than twenty-five years, has finally become real.”