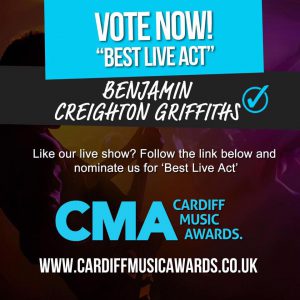 We have long been big fans of Ben Creighton Griffiths.  He’s now up for ‘Best Live Act’ at the Cardiff Music Awards! Voting is now open here; Cardiff-based readers can also buy tickets to the awards ceremony on March 30th.

Ben has also just released a new CD: 1 Man Band. Ben has been working a lot with his blue harp, synths and keys, creating a whole band while often remaining the only performer. We have enjoyed these sets several times – in Cambridge, Prague,  Cardiff and Utrecht, to name but a few – and now you can buy the album. “For this recording, I was not aiming to make a harp CD, a jazz CD or even a jazz harp CD”, Ben explains. “1 Man Band is a snapshot of where I am at this point in my development as a musicians – a showcase of what I’m enjoying doing at this moment in time…I’ve taken blends of some genres that I love (like gypsy jazz, reggae and funk), utilised both electronic and acoustic music, and included a variety of different tones and timbres reflecting the live music I perform.” 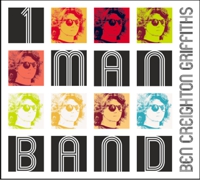 1 Man Band is largely a solo disc, but Ben is joined by Matthew Williams on percussion and drums for the final track on the album: ‘The Station’, composed by Ben and Matthew together. “While this track belongs to another project that is currently in the works, I wanted to provide it as a preview. My great friend Matthew Williams and I have created a group called Chube – rather than being a regular band, our aim is to be the nucleus of a group of like-minded musicians writing, arranging and recording tracks together. This group-based work is something that I feel will give me more opportunities as a composer as well as a performer, and we look forward to developing the project during 2017.”

1 Man Band is available from Ben’s own e-store – and of course, from the Camac online boutique!