One of the best things about the World Harp Congress is the chance to immerse oneself in new musical genres. Many of us, for example, have learnt a lot more about the beautiful instrument that is the Chinese Konghou. The Konghou boasts over three thousand years of history, but became extinct some time during the Ming Dynasty. It was then successfully revived, as a double bridge harp. Today it exists both with a full set of pedals, and as a lever konghou, and its double bridged strings allow the use of techniques such as vibrato and bending tones. 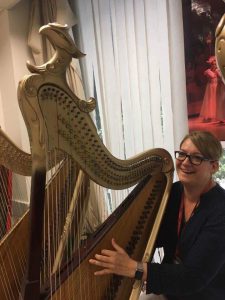 Many think it’s a dragon, but the animal on top of this Konghou is actually a beautiful phoenix

We have also had the chance to explore Paraguyan music, with Sixto Corbalán. Sixto firstly gave a lecture about ‘Techniques and Tendencies of the Contemporary Paraguayan Harp’. This particularly focused on rhythmic and melodic patterns that, once learnt, help with improvisation. At the end of the day, technique – be it on a Konghou, South American harp or classical harp, and whether it’s physical or musical – exists in order not to weigh us down with things to learn, but to facilitate expression. We got a chance to hear Paraguayan technique in action later that afternoon, with compositions by Sixto Corbalán, Félix Pérez Cardoso and Janjo Corbalán.

Alfredo Rolando Ortiz will be continuing our South American explorations today, with ‘Special Latin American Effects for All Harps, All Levels’. These techniques promise to extend your range: muffled glissandi, mandolin-like effects, special Paraguayan bass muffling techniques, to name but a few. Don’t miss your chance also to explore Alfredo’s many very lovely and very useful collections of South American sheet music, again suitable across all levels. Alfredo also has a fascinating life story, which he recounted for the Camac blog before he came to play for us in Marseille last year.

Following Alfredo in the Studio Theatre, Gabriella Dall’Olio will perform Ginastera’s Sonatina – a lovely work and loved by many harpists, until the composer withdrew it from publication.
I want to enable video content and agree that data will be loaded from Google (see Privacy Policy).
The Studio Theatre will also be the stage for Paris’Click. Their electronic music defies easy categorisation, drawing reference from classical music, progressive rock and experimental theatre. They will soon release their new recording Assassine Logique, and some of today’s set will preview this album. Other parts of the set are from their first album, Reset – like a cover of Purcell’s Cold Song, where the harp takes the place of the orchestra, and the bass guitar becomes the solo instrument.
Hong Kong is an excellent location to explore crossover projects between East and West, and the series of ‘Asian Highlight Concerts’ is particularly fertile ground for this. We’ve explored New Wave music from Taiwanese harpists Vivien Chen, Wei-Ching Tseng, Shannon Chieh, Che-Yi Lee, our Taiwanese partner Meng-Lu Chiu, Yi-Wen Kuang, Su-Ting Hsu, Shu-Hsin Chen, Wei-Ching Tseng, Chu-Heng Lio and Feng-Yu Shih. Dancers, the calligrapher Shih-Hsien Chen and electronic processing of diverse kinds contributed to a fascinating expoloration of new directions for the electroacoustic harp. Sunday evening’s concert in the Hong Kong City Hall Concert Hall was an impressive piece of dance theatre, combining new Japanese and Chinese writing, with and Chinese and Western musical instruments. Today, we are looking forward to some more Eastern-Western explorations, with “In/Between: A Theatrical Song Cycle”. Performed by Jessica Ng and Judy Ho, this semi-staged production features Chinese and African poetry, set to music in a contemporary classical style. Rarely in the harp world do we have so much opportunity to draw new inspiration and acquire new perspectives, and it is an invaluable one. An interview with Alfredo Rolando Ortiz

South American harp legend, Alfredo Rolando Ortiz, will give a workshop for EVERYONE who wants to explore Latin music, in Marseille! Explore his amazing life story in the following interview. Read more… Gearing up for the first full day of the World Harp Congress? Here's our round-up of the day's events. Read more…