The characteristics of a good musician can be summarized as follows: 1. A well-trained ear. 2. A well-trained intelligence. 3. A well-trained heart. 4. A well-trained hand. All four must develop together, in constant equilibrium. As soon as one lags behind or rushes ahead, there is something wrong. So far most of you have met only the requirement of the fourth point: the training of your fingers has left the rest far behind. You would have achieved the same results more quickly and easily, however, if your training in the other three had kept pace.

Here in Hong Kong, we have been joined by many of our valued partners – China, Japan, Singapore, Taiwan, Thailand, Malaysia, Indonesia, the Netherlands, Belgium, Croatia, Hungary and the Czech Republic! Csilla Gulyás of Camac Harps Hungary is (like many of us) a harpist, and she is also a specialist in the Kodaly teaching method. Today’s events begin with her lecture on this subject, outlining the principles of what started as a concept, and later became a widespread method. Kodály believed that music education should start as early as possible, using folk songs and other good music to develop the children’s ears. He also understood – in contrast to many politicians and other educational power centres today – that the study of music is not solely about music. “Music”, he pointed out, “is intellectual food that cannot be replaced by anything else.” It teaches children about music, but also about language; culture; morals; how to work steadily at something; teamwork…the list goes on.

After Csilla’s lecture, we’ll be able to explore some more new music (including the entrancing-sounding “How Perfumes are Transmitted by Feathery Telegraph”, by Chun Ting Pang). The concert at 10:30 features additions to the flute, viola and harp repertoire; a must for all who are interested in developing their performances in Debussy’s inspired ensemble. There will also be an Experimental Showcase to begin the afternoon, with the Peabody Conservatory Harp Studio. Produced by Rob Neubauer, DIMENSIONS will be a ten-segment presentation both featuring new music, and highlighting the artists from Baltimore who perform it. We’re  intrigued by the ‘Machined Metal Sculpture’, set to the Lecuona/Grandjany Malagueña – and by the final work, Rob Neubauer’s video synthesis to Domenick Argento’s ‘The Angel Israfil (whose heart-strings are a lute’. This reminds me of something Cristina Braga told us all at her concert. The word “person” comes from the Latin, “per sona”: one who the sound goes through. 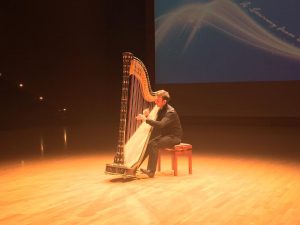 A big Congress, with all its different strands, is the perfect place to reflect. The Hong Kong WHC has achieved one thousand full-time delegates. Playing the harp can be quite solitary, and the chance to meet and exchange with colleagues is all the more valuable. For anything involving competing (competitions, auditions…), this could not be more important: by definition, competition means pitting yourself against others. This afternoon, there will a panel discussion about how to prepare for competitions – and how to deal with it when you lose. This last is also essential, as ultimately only one person goes away happy from a competition, and you have to channel losing positively, in order nonetheless to benefit from all that work. Katherine Siochi, winner of the 10th USA International Harp Competition, and Yuying Chen, winner of the 19th International Harp Contest in Israel, will also show us how it’s done by performing a joint International Winners Recital. We’re looking forward to this hugely, and to welcoming Yuying to our Camac Festival in Lyon in October.

Competitions may, or may not, be of burning interest to you, depending on how you’re involved with the harp. Another very positive facet of the way the World Harp Congress brings so many of us together, is that we can all widen our perspectives. We all start in more or less one tradition, or another. Whether you want to be a classical soloist or orchestral player; whether you play jazz, pop, traditional or world music; whether you play the harp, make harps, or do both – there are many ways to conduct a life in music, and they all have purpose and value. Maybe you think you want to be a classical soloist, but later get into jazz. Maybe you begin as a harpist, then become a harp maker or work for one of the harp makers. Often, a Congress can help you arrive at these important decisions. 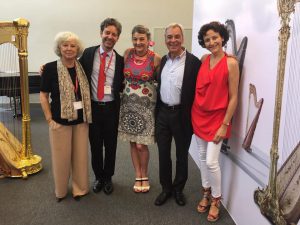 time for a nice moment with Salvi/Lyon and Healy on the third floor, joined by Catherine Michel, Gabriella Dall’Olio and Isabelle Moretti.

Speaking of a harpist who became a harp maker, this evening will feature a tribe to Victor Salvi. Musician, instrument maker and businessman, Victor Salvi’s life was an incredible journey: from his first dream of building a harp, to bringing the instrument into the twentieth century, and making it accessible to an unparalleled number of harpists. We are all looking forward to paying tribute to his life and work. 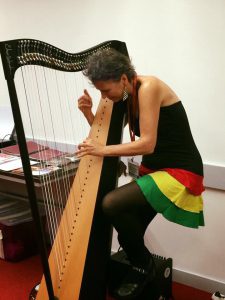 Late tonight, we can enjoy not one, but two pop and jazz events! Park Stickney, Gan Guo, Deborah Henson-Conant, Shelley Fairplay, Marcella Carboni and Max De Aloe will take to the stage, for a night that promises to be great, and late. Diverse world music, fascinating crossover, Parisian harp rock, beautiful out-of-print classical music and even a free afternoon are all waiting for us to enjoy, today at the WHC. Read more… From China to Russia via Brazil, Malaysia to the United Kingdom and from historical performance practice to jazz and experimental late-night music, we're looking forward to another promising day at the World Harp Congress. Read more…